It is never too early to start looking at the NFL Draft.  TheClemsonInsider.com takes a look at what some are saying about the current Tigers.

The NFL draft has become a very popular topic in the media, and when Clemson has some top players, like it has in the past few years, it brings great attention to the school and football program.  There is no doubt that, players like C.J. Spiller, Jacoby Ford, Gaines Adams, Philip Merling helped Clemson in recruiting.  Here is a look at what people are saying about Clemson players:

Scout Inc – Grade 68 – “Quick first step and generally gets some penetration or at least good initial positioning. Does a solid job with his hands in the run game. Is disciplined. Shows good awareness, finds the ball quickly and is typically able to disengage from blocks in time to pursue. Is disruptive and makes a lot of plays in the backfield.”

Stock: Rising. Jenkins stock should be rising, especially after a great game against Georgia Tech.  He has great size and seems to make a lot of tackles for loss.  I am not sure why Scout Inc has him rated so poorly.

Scout Inc. Grade- 76 “Has long arms and strong upper body. Shows a powerful punch and will jar defender with initial pop. Can typically get set in time to ride speed rushers wide. Rarely loses once he has locked on.”

Stock: Really Rising.  The offensive line play has been superb this year and when you are not hearing a lot about a lineman, usually means they are doing a great job.

Mel Kiper Jr. – #1 Safety – “McDaniel has long been on the radar of NFL personnel folks. He’s one of those guys right on the edge of the Big Board, and the 2010 season is solidifying his stock. “

Scout Inc: Grade 85 – “Closes in a hurry and makes a lot of plays in pursuit. Tough guy who loves to mix it up. Explodes up the field when turned loose on the blitz and can be very disruptive. “

Stock: Neutral.  Clemson fans have seen the playmaking ability of McDaniel, but he hasn’t put up the same interception numbers this year.

Mel Kiper Jr. – 7th overall- “A great athlete at his size, Bowers leads the nation in TFL and continues to fly up the Board. Prototype as a 4-3 DE, he’s put it all together”

NflDraftCountDown.com : 12th overall in mock draft – “After battling injuries as a sophomore Bowers is finally translating all of that immense talent into production this year and he has the tools to be a Top 15 overall pick in the 2011 NFL Draft.”

Stock: Exploding.  He is absolutely dominating, Clemson fans can only hope that like C.J. Spiller, Bowers wants to finish what he started and graduate.

Kyle Parker could test the draft waters next year if he finishes strong this season.

The threat of an NFL lockout could have a major impact on which juniors will leave early for the draft.  Keep an eye on that come January. 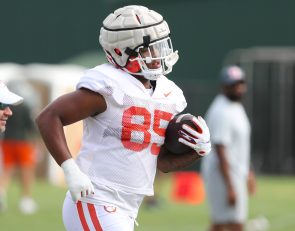 Clemson has a group of tight ends that head coach Dabo Swinney believes is in line for a big season. Whether or not Josh Sapp becomes part of those plans immediately remains to be seen, but the true (…)

Ronan Hanafin knows that when he eventually leaves Clemson, he’ll be faster, stronger, smarter and most importantly, a better man. It’s why the four-star athlete out of Buckingham Browne & Nichols School (…)

Nothing has changed with Clemson’s quarterback situation with less than three weeks remaining before the Tigers’ Labor Day opener. But even if things don’t change at the top of the depth chart throughout (…)

The Clemson Insider has confirmed that former Clemson head coach Monte Lee will be coaching for the Tigers’ rival next season. With South Carolina baseball assistant Chad Caillet retiring, Lee is joining the (…)

This week, the Football Writers Association of America and the National Football Foundation released its Super 16 preseason poll. Clemson, ranked No. 4 in both the preseason AP Top 25 and preseason (…)

Will Shipley is collaborating with a local startup to help fans more closely connect with Clemson’s star running back this season. BandwagonFanClub, Inc., a South Carolina-based experience technology (…)

There is finally a final decision on Deshaun Watson’s suspension. The NFL has reached a deal on a disciplinary settlement with the former Clemson and current Cleveland Browns quarterback. Watson and the NFL (…)

From a developmental standpoint, Clemson’s cornerback’s room was delivered a blow last week. Clemson coach Dabo Swinney announced that freshman Myles Oliver had a shoulder injury and would subsequently be (…)

Swinney gives post-scrimmage update on health status of his team

Venables' decision, which surprised Swinney, paying off for Tigers

'He made it easy': Swinney talks decision to place running back on scholarship