TheClemsonInsider.com was on hand to catch some of the action as the Tigers hit the field in snowy conditions.

Watch some of Monday’s practice on TCITV: 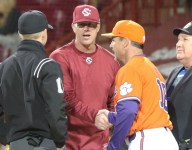 Clemson’s game against South Carolina for Friday has been postponed. The makeup date for the game will be May 11.