Clemson returns to ACC play Saturday evening at Littlejohn Coliseum as they search for their first ACC win.  The Tigers look to win their seventh straight game.

QUICK FACTS
• Clemson has won each of the last three games against Miami (FL) overall, and has taken the last three games played at Littlejohn Coliseum.
• Senior Jerai Grant has 15 blocked shots in the last two games combined, the most over consecutive games since Sharone Wright had 15 over consecutive games in 1992. Grant is 16th in the nation in blocked shots per game. Grant is shooting 74 percent from the field at home this year (45-61).
• Clemson is on a six-game winning streak. The Tigers have allowed the opposition just a .343 shooting percentage from the field in those six games.
• Jerai Grant has averaged 15.8 points, 7.5 rebounds, shot 72.7 percent from the field and had 4.5 blocks per game during the six-game winning streak.
• Grant has moved into first place on Clemson’s career field goal percentage list with a .613 figure. That includes a .639 figure so far this season.
• Clemson has held each of its 15 opponents this season under 50 percent in field goal shooting, the longest streak for the program since 2007-08.
• The Tiger defense is atop the ACC rankings in scoring defense, allowing just 58.9 points per game to opponents. Clemson has held five of its last six opponents to under 60 points. Clemson is 19th in the nation in scoring defense overall.
• Milton Jennings had a double-double in just 18 minutes of play in the win over The Citadel.
• Demontez Stitt has posted double figures in 11 of his last 12 games and continues to lead the team in scoring at 13.0 points per game. Stitt had a team-best 16 points in the win over The Citadel.
• Andre Young has made at least one three-point goal in 16 straight games, including all 15 this season. That is the longest active streak in the ACC.
• Clemson is 8-1 at home so far this season and has shot 48.4 percent from the field. Clemson has allowed opponents to shoot just 37.5 percent from the field at home this season.

Clemson's trip to France about more than just basketball 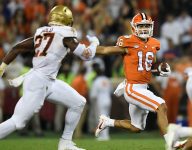