Blacksburg, VA – The Tigers and Hokies played the final game of their series Sunday afternoon at English Field.  Jonathan Meyer went the distance for the Tigers, but it wasn’t enough as Virginia Tech won 3-2.  It was the 11th time in a row that the Tigers came up short in one run road games.

Once again the teams had to battle the weather.  Rain started in the first inning and lasted until the middle of the second inning.  Puddles formed in the infield so there was a delay while the grounds crew worked on the infield.

Jonathan Meyer started for the Tigers and pitched a complete game for the Tigers.  Meyer went 8.0 innings and gave up eight hits and three earned runs.  Meyer threw 65 strikes in 96 pitches.

The Tigers scored their two runs on seven hits.  Spencer Kieboom was the only Tiger with multiple hits on the afternoon as he went 2-2.

Virginia Tech jumped out to a lead in the bottom of the third inning.  Meyer gave up his first hit of the game a double to center.  The Hokies bunted the runner over and he scored on a sacrifice fly.

Clemson tied the game in the top of the fifth with their first run.  Spencer Kieboom singled to right with two outs.  John Hinson followed with a singled before Phil Pohl walked to load the bases.  Brad Miller walked to score Kieboom and tie the game at one.

The Hokies bounced right back to take the lead in the bottom of the fifth as they plated one run to lead 2-1.  Virginia Tech added an insurance run in the seventh.

Clemson tried to rally in the ninth.  With one out Chris Epps singled.  Jon McGibbon pinch hit and hit a single to right.  Epps and McGibbon advanced on a wild pitch.  Chris Epps then scored on another wild pitch while McGibbon advanced to third.  John Hinson struck out to give the Hokies their second out.  Phil Pohl lined a ball just foul down the left field line that would have tied the game.  On the next pitch Pohl grounded out to second.

Clemson fell to 36-16 and 16-12 in the ACC with the victory.  The Tigers play Davidson Tuesday night at Doug Kingsmore Stadium. 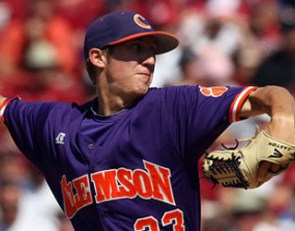