Clemson Tied for Sixth After First

Clemson Tied for Sixth After First

Clemson, SC—McCuen Elmore and Thomas Bradshaw had rounds of two under par 70 to lead Clemson to a one-under-par team score of 287 in the first round of the ACC Men’s Golf Championships at The Old North State Club in New London, NC.  Clemson stands tied for sixth with Maryland after the first 18 holes of the 54-hole event.  Georgia Tech leads the way at 270, 18-under-par.

Bradshaw had his 10th under par round of the year in shooting 70.  He had five birdies, most among Clemson golfers on Friday, and three bogeys. Elmore had three birdies, one bogey and 14 pars in his best round  since shooting a 70 at the Furman Invitational on March 17.

Corbin Mills, playing his first round for Clemson since March 18, had a 73 in the opening round of the ACC Tournament. He had four bogeys and three birdies  for his opening 73. Mills has been a player who improves as he goes along in a tournament. This marked the fifth time in the last six tournaments that he has shot over par in the first round, but he has a 69. 71 final round average for the year, third best in the nation.

Freshman Billy Kennerly shot an opening round 74 that included four bogeys and two birdies.   It was his highest score since he had an opening round 75 at Augusta State on March 31.  But his score counted towards Clemson’s team score for the 25th time in 28 rounds this year, most on the team.

Crawford Reeves, Clemson’s leader in stroke average  with a 71.07 average, shot an 80 on Friday,  his worst round of the year by six shots.  He had shot par or better in 10 of his last 12 rounds.  But, the junior from Greenville had a double bogey and a triple bogey.  He did close with a birdie on the 18th hole.

Clemson continues play on Saturday.  Scores can be followed on golfstat.com. 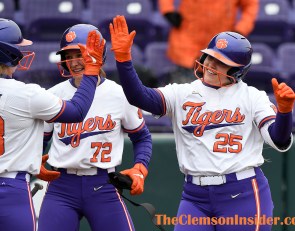 Former Clemson wide receiver took to Twitter to clear the air on something that happened during his freshman year in Tigertown. Not sure why Tee Higgins wanted to tweet this Sunday morning, but the (…)