Clemson, SC—Clemson golfer Corbin Mills has been named a third-team All-American by Golfweek and an honorable mention Ping All-American by the Golf Coaches Association.  Mills just completed his junior year at Clemson with a 72.51 stroke average, the eighth best in school history.  He announced last week that he will turn professional after playing for the United States in the Palmer Cup Matches on June 30.

This season Mills had a team best 71.30 stroke average, the ninth best in school history.  He had three top 10 finishes, including medalist honors at the Jerry Pate Invitational where he defeated, among others, Texas freshman and first-team All-American  Jordan Spieth, who was recently the low amateur at the US Open.  Mills final 201 score, tied for the lowest 54 hole score in Clemson history.

Mills had 13 under-par rounds, including eight in the 60s this year.  He was seven-under-par for his 27 rounds this year.  He also finished sixth at the ACC Tournament and third at the Furman Invitational.

Mills also played in the Masters and had rounds of 74-81 for the two days.  Hemissed the cut by one shot at the Heritage on the PGA Tour the following week, with a 146 score.  Last summer he won the US Public Links championship and the Players Amateur. 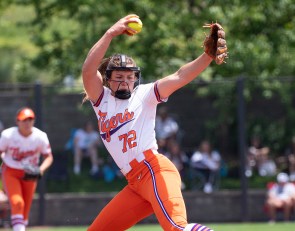