When the conference began discussing the possibility of adding Notre Dame as a 15th member over six months ago, concern was brought up about the Irish’s strong feelings towards staying as an independent when it came to football.

The ACC has long had a policy that it would not accept partial members into its league, but Clemson President James Barker got ACC Commissioner John Swofford thinking when he told him, “What was best 20 years ago isn’t necessarily best in today’s world.”

With that said, the ACC Council of Presidents unanimously voted to accept the University of Notre Dame as a new member. The Irish will compete as full members in all conference sponsored sports with the exception of football which will play five games annually against league programs.

“When you look at the ACC, its history, its traditions and its cultural with so much of that being its high academic institutions that play sports at the highest level, there is no question the University of Notre Dame fits the ACC profile.”

Notre Dame Athletic Director Jack Swarbrick says their goal is to start playing five ACC schools each year in football by the start of the 2014 season. The ACC is expected to have a round-robin like scheduling with ACC football members and the Irish, which means Clemson will play Notre Dame at the least by the 2018 football season.

It is unlikely Clemson will play Notre Dame in 2014 because the Tigers will play at Georgia that year and host archrival South Carolina.

“The idea is that we will move through the entire membership,” Swofford said. “In a perfect world, each ACC team will play Notre Dame either at home or away at least once in every three-year period. We know Notre Dame already has some games scheduled against ACC opponents so we need to take a look at that and look at what works and look at maintaining those contractual games is the right investment thing to do before we get into the alternate rotation that we would have.”

As of right now, the Irish will have to wait until January of 2015 to officially join the ACC in all the other sports due to a $5 million dollar, 27-month exit fee to leave the Big East Conference, which currently houses Notre Dame’s basketball and Olympic sports.

Swofford alluded to the fact that the ACC and ESPN have already began talks to renegotiate its television contract, which is particularly interesting to Clemson in regards to the nine-game football schedule, which is supposed to begin in 2013.

The Commissioner did confirm that the conference can take another look at the nine-game schedule should the athletic directors want to. Clemson, as you know, is affected by this more than anyone because of its annual rivalry game with SEC foe South Carolina. Under the nine-game schedule, Clemson will have to give up playing the Georgias and Auburns of the world should this rule stay in affect.

It could potentially hurt Clemson as well in regards to the home-and-home meetings with Notre Dame in the future. Clemson will preferably like to keep seven home games in the current 12-game schedule.

“If enough of the (athletic directors) want to revisit it, then it will be revisited,” Swofford said. “I don’t say that to suggest that it is likely that we would go from nine back to eight, but if the ADs want to rethink that and re-talk about it, then that certainly can happen.” 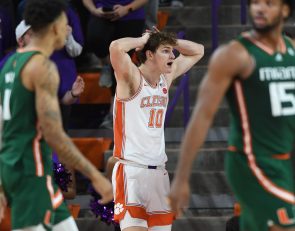 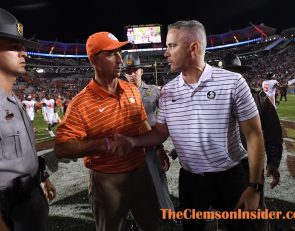