Future 2014 5-star linebacker Raekwon McMillan was back in Death Valley Saturday afternoon where he watched the Tigers put up 62 as they defeated NC State.

“I came down with two of my teammates.  We had a good time.  It was a nice trip.  We just came up for the day, said McMillan.

What did Raekwon think of the game day atmosphere in the Valley?

“We just soaked in the game.  It was a great crowd.  They were really into the game,” replied McMillan.

Before the game started the prize recruit got to go to the top of the Hill.

“It was a good experience.  The fans were crazy,” said McMillan.

Next week Raekwon will travel to see  one the the nation’s top rivalries.

“I am going to Ohio State next weekend,” said McMillan.

Nothing has changed at the top for the future 5-star linebacker.

“Nothing has changed.  It is still Ohio State 1, Clemson and Georgia are tied at No. 2.  They Alabama and Southern Cal,” said McMillan. 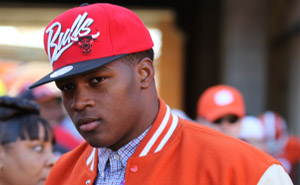