“I don’t know my visit plans yet.  I am going to Ole Miss on January 25.  I am trying to set one with Clemson.  I am also going to try to go to LSU,” said Kamara.

When asked if he has a favorite, Kamara responded, “They are all even”.

What is David hearing from the Clemson staff right now?

“He still wants me to go to Clemson, but he is letting me decide where I want to play,” said Kamara.

The Grayson standout isn’t sure when he will have a final decision.

“I don’t know.  I am not sure yet.  I know Ole Miss and LSU are his main ones.  Then Clemson and Alabama,” said Kamara.

With a number of schools getting close to filling up their scholarship numbers for the 2013 class is David concerned some teams may fill up at his position?

“Nah, I’m not worried about that,” said Kamara. 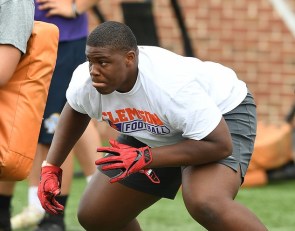