New London, NC—Cody Proveaux fired a career best round of five-under-par 67, while Miller Capps and Billy Kennerly had rounds of 69 to lead Clemson to a 277 team score and a 19-shot improvement over Friday’s first round at the 2013 ACC Men’s Golf Tournament at The Old North State Club at New London, NC.    The Tigers improved from ninth place to seventh place (team score of 573) after 36 holes of the 60th annual event.  The third and final round will be played on Sunday.

Clemson is just one shot behind Wake Forest for sixth place entering the final round.

Clemson’s 277 team score was its best team score of the year by four shots.  The 11-under-par round was also the most under par Larry Penley’s team has been this year.  It was also the first time this year three different Tigers had rounds in the 60s on the same day. The 277 score was also the third best team round of the day.

“Everyone was mentally engaged and more relaxed today,” said Penley, who is in his 30th season as Clemson’s Head Coach.  “We were up-tight from breakfast to the first tee on Friday and it showed.  My talk to the team on Friday night was all about relaxing and having some fun.  We have a group of players who put pressure on themselves very easily.  Today they relaxed and played well.”

His putting was the best part of his game.  He made a 50-footer for birdie on the fifth hole, a pair of eight footers for birdies on 12 and 13, respectively,  and an 18-footer for par on 16.  The distance on his made putts on the 18 holes was 136 feet.  He made putts of at least five feet on five of the last six holes.

“The overall key was certainly putting, but I put the ball in better spots all day, “ said Proveaux, the reigning South Carolina Amateur Champion.  “I just took it one shot at a time today.  Yesterday I made a triple bogey early on the fifth hole and it had me flustered.  Today, I made a 50 footer on that hole and it jump started me.”   Proveaux was eight strokes better in his round on Saturday compared with Friday. Four of those improved shots came on the fifth hole.

Proveaux had some good fortune during his round.  On the 16th hole, his second shot from the rough ( just six inches off the fairway), was hit left of the green and headed for the water.  But it struck a rock, bounded high into the air across the width of the green and landed just off the right side of the green.  He got up and down by making an 18 footer.

Kennerly and Capps both had rounds of three-under-par 69.  Capps hit 13 of 18 greens on the day and had six birdies.  He made a 15-footer on the third hole and a 20-footer on the 16th.  He also chipped in from the fringe on the eighth hole.

Kennerly’s 69 was his low round since shooting a 67 at Puerto Rico on Feb. 17.  He made five birdies, including the 16th and 17th holes, holes that are usually among the toughest on the course.  He hit his approach from 148 yards with a nine iron to within two feet of the cup on the 16th hole, then made a 15 footer on the par three 17th hole.

Senior Crawford Reeves got off to a rough start with a three-over-par score on the front night.  But he battled back to shoot 33 on the back nine to finish at even par.  He birdied the 10th, 16th and 18th holes coming in thanks to outstanding iron shots.  All three putts were from less than 10 feet.

A big key for Clemson on the day was the team’s play on holes 16 through 18.  Clemson was seven-under-par as a team in terms of  counting scores over those holes.

Freshman Stephen Behr had a four-over-par score of 76 so his score did not count towards Clemson’s team score.  He was one under par on the front nine, then had some unfortunate bounces on the back nine when he shot 41. 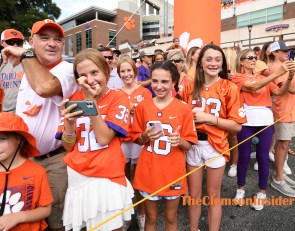 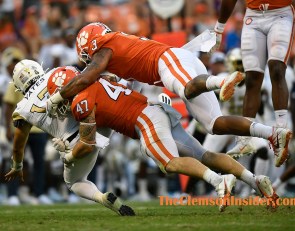