ACC is under a Hurricane watch

ACC is under a Hurricane watch

Since then, Virginia Tech has won the ACC Championship four times and played for it two other times, while Boston College has played for the conference crown twice. Miami, on the other hand, a program that traditionally has been one of the best in college football, has yet to sniff at an ACC Championship.

Swofford was hoping Miami would be the balance in a conference that Florida State owned for more than a decade. Since the two were already big rivals and both were nationally recognized programs and were known for classic their matchups, he and many figured the ACC Championship Game in most years would be a renewal of that great rivalry.

But that has hardly been the case. Though FSU has held up its end of the bargain with three championship appearances and winning two, the Hurricanes are still looking for their first. Could 2013 be the year Miami finally breaks through and plays for a championship? The odds are good.

Miami (7-5, 5-3 ACC in 2012): The Hurricanes return eight starters on one of the more explosive offenses in the country, plus they have a very favorable schedule to boot. It all starts with quarterback Stephen Morris, who set a school record for total offense last year, and ended the season by throwing 11 touchdowns and no interceptions in the last four games. Running back Duke Johnson is one of the more explosive players in the ACC. He rushed for 947 yards last year—a freshman record at Miami—and finished second in the country in kickoff returns. There is no shortage of pass catches either on the team as Phillip Dorsett and Rashawn Scott both return. The defense is a different question as only four starters return from a unit that ranked near the bottom in the league in almost every category last year.  Linebacker Danny Perryman, one of the hardest hitters in the ACC, is back at weakside backer as is ends Anthony Chickillo and Shayon Green. Defensive tackle Olsen Pierre is also back for his junior season.

Georgia Tech (7-7, 5-3 ACC in 2012): This writer will not be surprised if Georgia Tech sneaks up on a few people and finds itself in the ACC Championship Game, again. But this time, the Yellow Jackets will more than likely earn their way to it, instead of sneaking in like last year. Georgia Tech returns eight starters on offense and eight on defense, which is a solid foundation for a team that was close to breaking through last year despite the mid-season firing of defensive coordinator Al Groh. The Jackets finished strong as they nearly knocked off Florida State in the ACC Championship game and then dismantled former No. 1 Southern Cal in the Sun Bowl. Vad Lee takes over has the starting quarterback after sharing duties with Tevin Washington last year. He has a much stronger arm and is a very gifted runner, perfect for Paul Johnson’s spread-option offense. Redshirt freshman Justin Thomas will also spend time at quarterback as he is built in the same mold as Lee. Johnson spent the off season studying the San Francisco 49ers’ read option and how they used it in their Pistol sets. On defense, the Jackets will be more aggressive under new defensive coordinator Ted Roof, who moved the defensive back to a 4-3 base.

Virginia Tech (7-6, 4-4 ACC in 2012): The Hokies will have a small mountain to climb, but getting to the ACC Championship Game is not out of the realm of possibility. Head coach Frank Beamer made major changes to his offensive staff as he brought in a new coordinator, a new offensive line coach and a new receivers coach. But how much will those changes help as Va. Tech must replace both tackles on the offensive line, replace pretty much the entire receiving corps and have new people in place at running back. The only constant from the last two years is quarterback Logan Thomas, who threw 16 interceptions and only 18 touchdown passes in 2012. Though nine starters are back from a defense that ranked second in the ACC last year, depth is a concern, especially at linebacker where the team is extremely thin.

North Carolina (8-4, 5-3 ACC in 2012): Granted the Tar Heels return quarterback Bryn Renner, wide receiver Quinshad Davis and left tackle James Hurst, but who isn’t coming back is the better story. UNC first must replace perhaps the ACC’s best overall player in 2012 in running back Giovani Bernard. It must also find new starters on the offensive line at right guard, right tackle and center. On defense, linebacker Kevin Reddick is gone as well as former defensive tackle Sylvester Williams from a defense that was not very good to begin with in 2012. Getting to the ACC championship game might be a little too much to ask this year, especially considering the Tar Heels have a schedule that includes road games at South Carolina, at Georgia Tech, at Virginia Tech, at NC State and at Pittsburgh.

Pittsburgh (6-7, 3-4 Big East in 2012): Pittsburgh enters ACC play for the first time with an experienced quarterback and a young running game. Tom Savage will start at quarterback in their pro-style offense after bouncing around from school to school most of his career. He is big at 6-foot-5, 230 and has a strong arm. With Ray Graham gone the job appeared to be Rushel Shell’s to own for the next three years, but he opted out of Pittsburgh in the spring, which left the Pitts coaching staff scrambling. On defense, the Panthers return eight starters including defensive tackle Aaron Donald, who ranked 12th nationally in tackles for loss last season and safety Jason Hendricks, who ranked sixth nationally with six interceptions, while also recording a team-high 90 tackles.

Virginia (4-8, 2-6 ACC in 2012): Head coach Mike London went out and brought in a whole new régime to help his program. It is a staff that has 135 years of coaching experience. Three of the four new coaches were head coaches at one point, including former Boston College and NC State head coach Tom O’Brien, who is his new Associate Head Coach and is in charge of the tight ends. Former Idaho State head coach Larry Lewis is coaching the running backs and special teams, while former Colorado State head coach Steve Fairfield is the new offensive coordinator. Then there is blitz-happy John Tenuta running things on the defensive side of the ball. With a young team that has lots of talent, Virginia should be an interesting team to watch this fall.

Duke (6-7, 3-5 ACC in 2012): The Blue Devils finally made it to a bowl game last season—their first since 1994—but getting there for a second straight season will be difficult in 2013. David Cutcliffe, who has done an excellent job turning the attitude around at Duke, must replace Sean Renfree at quarterback as well as wide receiver Conner Vernon. The running game, which was the worst in the ACC in 2012, lacks a go-to guy, but the offensive line does return four starters and quarterback Anthony Boone does present more of a running threat than Renfree ever did. The defense only brings back five starters, but three of those five will be back on the defensive line. Besides cornerback Ross Cockrell—five interceptions and 71 tackles—the secondary is a big question mark with four new starters in Duke’s 4-2-5 scheme. 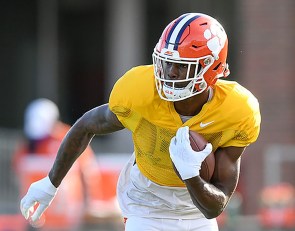