Offensive line is a position group no one is ever really satisfied about. Ask any coach, fan, or pundit in the country about a particular team, and almost universally, offensive line depth will be considered a weakness—or at least a concern.

Not so with Clemson’s group up front this season. Depending on who is speaking, there are between eight and 12 players who could conceivably be counted on to contribute for a program with elite aspirations this season.

“There is more experience,” interior lineman Reid Webster said. “Guys are older. We’re another year into the system. People know more about what they’re supposed to do than in previous years.”

Even the best programs wring their hands over the play up front. It is such a critical aspect of winning football games that the importance of offensive line play cannot be overstated.

But when concerns shift from the first team to the second team—and in some cases, the third team—a team like Clemson puts itself at a competitive advantage against the majority of the country that is trying to piece things together.

“I think we definitely know where we stand after camp and what we need to work on next week,” starting right tackle Gifford Timothy said. “Coach (Chad) Morris is going to put us in a great gameplan and give us the best situation for us to make our plays.”

Four starters return on the offensive line this season for the Tigers, a primary reason why expectations for this team are so lofty. It stands to reason that camaraderie up front can help Clemson withstand tough defenses from places like Georgia, Florida State, and South Carolina that could be potential stumbling blocks.

A certain cohesiveness on the offensive line is important, and Timothy says such a bond between brethren comes with time.

“It all depends on if you can trust the guy next to you,” he said. “That’s huge.”

The staff recognizes its luxurious spot, which is why Morris and his staff have begun to tinker to see if small enhancements could be made. Guys like Webster—who says he has worked at both guard spots and center—have begun to cross-train at other positions. This is designed to increase depth and give more players an opportunity to participate.

“I know what each position is doing,” Webster said. “I know their job as well as mine.”

It also means more time can be given to preparing for Georgia. Things will amp up in that regard as the game draws nearer, but Timothy says the coaching staff has already begun to get ready for the Tigers’ first opponent because they have a good feel for what they have on the offensive line.

For the first time in a while, Clemson has more answers than questions on the offensive line heading into the season. It represents yet another indicator of future success for the Tigers in 2013. 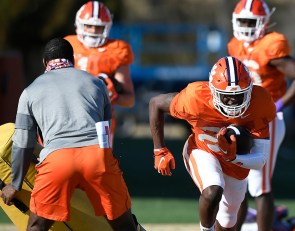 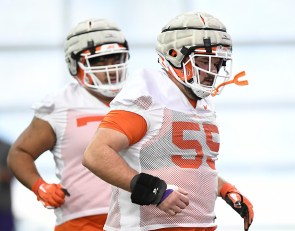