When the Demon Deacons have the ball: They like to run a little bit of everything. Wake Forest is a spread-option team that likes to run the football in a lot of different ways. Look to see the Deacons try a lot of orbit runs; jet sweeps and reverses, too. Those are things opponents have had a lot success on Clemson this year.  Clemson will use a safety, a linebacker or a defensive end, whoever is responsible based on the call has to be there to try and leverage those plays. Defensive coordinator Brent Venables wants those defenders to be there sooner rather than later. The leverage players have been late on a lot of those plays this year. Wake Quarterback Tanner Price likes to get the ball to wide receiver Michael Campanaro, who leads the ACC with 25 catches for 354 yards, and lot. Running back Josh Harris has 151 yards and two scores and is more than capable of breaking off a big play.

When the Tigers have the ball: The Demon Deacons have seven starts back on a defense that has forced 11 turnovers so far this season. Wake Forest’s defense ranks fifth in scoring defense (15.8 points) and sixth in total defense (311.5 yards) per game. It all starts with nose guard Nikita Whitlock, who leads the ACC in tackles for loss with nine. He also has 31 tackles. Wake plays an odd front so they have three true defensive linemen in the game all the time, but they will slide into some even looks with their linebackers. The secondary is as good as the Tigers have seen. Cornerbacks Merrill Noel and Kevin Johnson are three-year starters, while safety A.J. Marshall is another returning starter. The technique they play, their fundamentals and their eye discipline will challenge Clemson’s receivers. If the Tigers run bad routes and have bad technique than it could lead to interceptions. It will be a big challenge for Clemson’s wide receivers and tight ends competing against them.

Keep an eye on:

Nikita Whitlock: The nose guard is only 5-11, and is probably not that tall, and weighs 250 pounds, but he is second on the team with 31 tackles and leads the ACC with nine tackles for loss. Whitlock plays tall and big and is the heart of the defense. He is where everything starts. He is extremely fast getting off the ball and is constantly in the backfield trying to disrupt plays.

Since Dabo Swinney took over as head coach at Clemson, the Tigers are 4-0 against the Demon Deacons and in three of those games Clemson won by 35, 20 and 29 points. Only the 2011 game, when Wake had a 28-14 fourth-quarter lead, did the Demon Deacons come close to beating Clemson. Chandler Catanzaro made a 43-yard field goal as time expired to win the game for Clemson, sending them to the ACC Championship game that year. Overall, Swinney’s Clemson teams have outscored Wake Forest 141-54 and won by an average margin of 21.8 points in the four games.

To win, the Demon Deacons must…

Run the Rock: Wake Forest is averaging only 121.8 yards a game on the ground. If they are to have success moving the football on Clemson it will have to do better than that or Tigers’ defensive end Vic Beasley will have quarterback Tanner Price as a pre-dinner snack.

Protect Price: The Demon Deacons have already allowed nine sacks this year, which ranks last in the ACC. Beasley, Shaq Lawson, Corey Crawford and Stephone Anthony will be coming after Price all day, especially if Wake is sitting in third down-and-long situations all afternoon. Look to see Wake use a lot of max protection in those situations to try and counter and contain Clemson’s strong pass rush.

Clemson mistakes: Wake Forest is a very opportunistic team that usually will not beat itself. The Demon Deacons have already forced 11 turnovers this year, including six interceptions. Two years ago, they used some costly Clemson mistakes to build that two-touchdown lead. For Wake Forest to have a chance in this game it needs the Tigers to make some mistakes, which will not be easy considering the Clemson offense has only one committed turnover in three games thus far.

To win, the Tigers must…

Be consistent on offense: In the last two games, the Tigers have sputtered on the offensive side of the ball. Quarterback Tajh Boyd has gotten off to a slow start in each game. The running game has been pretty solid each week, but the offensive line has struggled in pass protection and has not exerted itself since the win over Georgia. This is one reason why the offense has been so inconsistent thus far.

Stay defensive: Clemson beat Georgia and NC State this year because of its defense. Even if the offense does get it together this week and shows how good it can be the defense needs to continue to play at the same level it has been playing at in the first three games. The Tigers have been quick to the ball, have gotten a good push up front and has kept everything in front of them in the secondary. If they keep doing that, then this Clemson team can be really special.

Just be Clemson: If the Tigers come out focused and play the way they are capable of playing then it does not matter what Wake Forest does. Clemson will win this game easily if it is motivated and plays smart football. 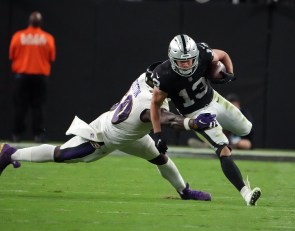