How big was Stephone Anthony’s return to Clemson for 2014? Let’s put it this way – it was huge!

Had Anthony decided to turn professional, it would have meant the Tigers would not have had one returning starter at linebacker in 2014, a position that saw a significant jump in production in 2013. Anthony led Clemson in tackles with 131, while weakside backer Spencer Shuey was second on the team with 119 tackles.

But Shuey, along with strongside linebacker Quandon Christian, has graduated and used up all of their eligibility. That leaves Clemson with two big holes to fill, along with finding some quality depth as well.

When the Tigers open up spring practice on March 5, the field will be wide open to see who will step up and become starters as well as a quality backup to Anthony in the middle.

Here are the list of linebackers that will be vying for starting jobs and playing time this spring.

Stephone Anthony, 6-2, 245, Sr. – As mentioned above, Anthony had the best season of his career for the Tigers in 2013. He totaled a team-best 131 tackles (10.1 per game) which included 13.5 tackles for loss and four sacks. He also broke up five passes, had one interception and had three quarterback pressures. He ended the season with a game-high 11 tackles in the Orange Bowl win over No. 7 Ohio State which he sealed with a game-saving interception in the final minute. The rising senior has 240 career tackles, seven sacks, 24 tackles for loss and two interceptions in his 23 career starts. Anthony will be the Tigers starting middle linebacker when the season begins Aug. 30 in Athens.

Tony Steward, 6-1, 230, Sr. – Like Anthony, Steward is a talented linebacker who has not fully lived up the hype when he signed as a five-star recruit four years ago. However, it’s not like he has had much of a chance. The talented linebacker has been hampered by injury after injury during most of his career at Clemson. The 2013 season was his best year to date as he totaled 37 tackles, 3.5 tackles for loss and one sack. He also started eight games on special teams, which proves his eagerness to want to help his team in any way that he can. For the first time in his career, Steward played in all 13 games this past year. He will be vying for the starting spot at weakside linebacker in the spring. 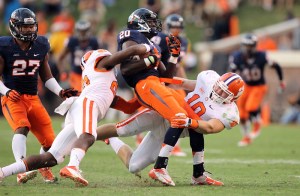 Clemson linebacker Ben Boulware (No. 10) helps bring down a Virginia running back in the Tigers’ 59-10 victory on Nov. 2, 2013. Boulware is expected to compete for a starting job at linebacker when spring practice opens up on March 5.

Ben Boulware, 5-11, 230, So. – The rising sophomore should challenge Steward for the starting spot at weakside backer and could be used as second-team guy at middle as well. As a freshman, the Anderson native totaled 25 tackles, 1.5 tackles for loss and one interception in 73 snaps in 10 games. He also started on special teams in seven games.

Kellen Jones, 6-1, 215, Jr. – In three games before getting hurt, Jones totaled 11 tackles as a reserve linebacker. He tore his ACL in the NC State game and missed the rest of the season. He is one of the smarter players on defense and has very good instincts, which sometimes can get him in trouble. He was a member of the Oklahoma football team in 2011 before transferring to Clemson and sitting out the 2012 season. Jones had a 44-yard interception return in last year’s spring game. Jones will challenge for the weakside spot and middle linebacker. He is one of the more versatile players on the defensive side of the ball.

T.J. Burrell, 5-11, 215, So. – Burrell was a primary backup last year that played in all 13 games. In 80 snaps, he recorded 11 tackles with his season-high coming against The Citadel in which he had five tackles. Burrell will get the chance to start at strongside backer along with Jones.

B.J. Goodson, 6-1, 235, Jr. – Goodson has been a backup linebacker and valuable member of the special teams in each of the last two seasons. He made big strides in summer camp which earned him a little more playing time. He totaled 11 tackles and one sack while playing 55 snaps in 20 games over his career. He has seven tackles in 33 snaps in over seven games in 2013.