“It went really well.  I was really impressed,” said Clark.

Who made the trip with Austin?

“It was me and my dad.  He was pretty excited about it too.  We had both never been there before.  It was a cool experience,” replied Clark.

The highlight of the visit for the Virginia standout was the time speaking with the Clemson staff.

Austin was impressed with Death Valley and the facilities at Clemson.

Austin and his father spent two days in Clemson.

“We came in Friday night and stayed at the hotel.  We got to the stadium around 10:30 Saturday and left around 5,” said Clark.

Several other visits are already planned for the prize recruit.

“I am going to Virginia Tech next weekend.  I am also planning to visit Tennessee, Penn State and Ohio State,” said Clark.

When asked if he has any early leaders, Clark responded, “I really don’t have any yet.  If I had to say which teams are recruiting me the hardest it would be Clemson, Tennessee, Ohio State, Virginia and Virginia Tech”.

Austin hopes to narrow the field this summer.

“I really don’t know when I will make my decision yet.  I know I want to narrow it down to five or six by the summer,” said Clark. 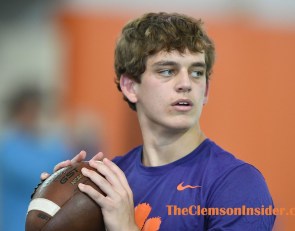