They were only a dozen, but they were dandy

They were only a dozen, but they were dandy

Recruiting isn’t an exact science. But when it comes to evaluating talent, Clemson head coach Dabo Swinney is pretty darn good at it.

Consider this. Of Swinney’s first class, 10 of the 12 players he signed at some point played a major role in why the Tigers have went 32-8 over the last three seasons.

“They’ve transformed Clemson. They’ve changed the culture, they set a standard and have made it realistic to achieve that standard,” Swinney said before The Citadel game last season. “They’re winners. They’re the winningest group here since the eighties. They’ve done a lot of great things – some things that had never been done, and a bunch of things that hadn’t been done in a long, long time.”

But it’s not just on the football field where the Class of 2009 succeeded. Sure winning the Orange Bowl over Ohio State or beating an LSU in the Chick-fil-A Bowl gets more press, but Swinney’s first class has also gone on to succeed in the classroom, too.

The 2009 class, also known as “The Dandy Dozen,” had a 100-percent graduation rate at Clemson, while 10 of the 12 started multiple games in their careers. The two who did not play—J.K. Jay and Bryce McNeal—still graduated with Clemson degrees.

“It’s not just this group – it’s all the people involved in the process,” Swinney said. “But this group in particular came here at a time when there was total change and no guarantees, and they took a leap of faith – in me, as their head coach, and in Clemson.

“What a journey it’s been. They’ve been a part of the brick and mortar in laying a foundation of sustained success. I think that’s what this group will be remembered for.”

The 2009 Class: The class was headlined by Tajh Boyd, who went on to have the best career of any quarterback at Clemson in terms of both winning and statistics. Ten of the 12 players signed played a significant role in the Tigers’ climb up the ACC and national standings. Others in the class include linebacker Quandon Christian, Malliciah Goodman, guard Tyler Shatley, linebacker Spencer Shuey and offensive tackle Brandon Thomas. Despite the small numbers, the 2009 class was ranked No. 19 by ESPN.

Below is a breakdown of each player in the class and what they accomplished before and during their time at Clemson.

Tajh Boyd, QB, Hampton, Va. – Boyd was a consensus top 100 player coming out of Phoebus High School. He was a five-star player where he completed 57 percent of his passes for 1,455 yards 23 touchdowns his senior year. He completed 69 percent of his passes for 2,050 yards and 25 touchdowns in his junior season. Was the co-MVP of the U.S. Army All-American Game. Clemson career: Boyd left Tigertown as the most prolific passer in school history. In all, he set 52 school and 13 ACC records, including touchdown passes and total touchdowns. He was also 32-8 (.800) as a starting quarterback and led the Tigers to an ACC Championship and bowl victories over No. 7 LSU and No. 7 Ohio State, while leading Clemson to back-to-back 11-win seasons. Boyd was named the ACC Player of the Year in 2012 as well as All-American. He was the MVP of the 2011 ACC Championship Game. Graduated? Yes. Hit or miss? Hit.

Quandon Christian, LB, Lake View, SC. – Christian was rated as the No. 22 best outside linebacker in the country by ESPN coming out of high school. He had 89 tackles and 8 sacks his senior year at Lake View. He was considered a three-star player by most outlets. Clemson career: He started 31 games in his career while recording 149 tackles, including 15 tackles for loss. He also had two interceptions and forced three fumbles. Graduated? Yes. Hit or miss? Hit. 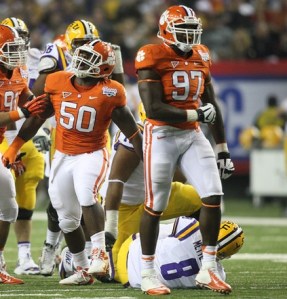 Malliciah Goodman (97) had three sacks for Clemson in the 2012 Chick-fil-A Bowl victory over No. 7 LSU.

Malliciah Goodman, DE, Florence, SC – Goodman was a four-star prospect and was rated as the No. 9 defensive end in the country coming out of West Florence High School. He was a Parade All-American after recording 73 tackles, 27 tackles for loss and 15 sacks in his senior season. He was an ESPN Top 150 player coming out of high school. Clemson career: Started in 28 games, including 27 in the last two years. He recorded 150 tackles at defensive end, including 21.5 tackles for loss, 12 sacks, three passes broken up and an eight caused fumbles. He was a fourth-round pick of the Atlanta Falcons in 2013. Goodman’s best game came in the Chick-fil-A Bowl against LSU where he recorded three sacks. Graduated? Yes. Hit or miss? Hit.

Corico (Hawkins) Wright, LB, Milledgeville, Ga. – Wright was rated as the No. 10 inside linebacker in the country by ESPN. He had 112 tackles, 16 tackles for loss, six sacks, four caused fumbles and eight passes broken at Baldwin County High School. Clemson career: He started 26 games in his Clemson career, 13 as a sophomore and 11 as a junior. He finished with 200 tackles, including 17 for loss, five sacks and two passes broken up. Graduated? Yes. Hit or miss? Hit.

J.K. Jay, OT, Greenville, S.C. – Jay was a can’t miss at Clemson. At 6-6, 290 pounds he was already listed as the co-starter a right tackle heading into fall camp in 2009, thanks to enrolling early and participating in spring drills. But in camp the former Christ Church star started to suffer back pain and soon his career was over. An ESPN top 150 player, Jay was the 11th best offensive tackle in the country coming out of high school. Clemson career: Never played and spent three years as a volunteer player’s coach until his graduation in 2012. It took Jay just three years to graduate. Graduated? Yes. Hit or miss? Miss.

Roderick McDowell, RB, Sumter, S.C. – McDowell is one of the best stories to come out of the class. He was rated as the No. 25 running back in the nation by ESPN. He rushed for 1,892 yards and 23 touchdowns in his senior season at Sumter High School. Clemson career: After sitting behind C.J Spiller, Jamie Harper and Andre Ellington for four years, he finally got his shot in 2013 and he became just the 13th different player in Clemson history to rush for 1,000 yards in a season. He played in 45 games and started 11 games in his career, rushing for more than 1,650 yards and scoring 12 touchdowns. Graduated? Yes. Hit or miss? Hit.

Bryce McNeal, WR, Minneapolis, Minn. – McNeal was rated as the No. 75 best player coming out of high school by ESPN and the No. 4 wide receiver. He played in the U.S. Army All-American Game with 2009 signee Tajh Boyd. Clemson career: McNeal never developed into that player Swinney thought he was going to be. He played as a reserve in 2010 and then transferred before the start of the 2011 season. He ultimately signed with Louisville in 2012 after graduating from Clemson, but he then left the team a short time after that. Graduated? Yes. Hit or miss? Miss.

Jonathon Meeks, S, Rock Hill, S.C. – Meeks was rated as the No. 18 prep player in the nation. He originally signed as member of the 2008 Class, but had to attend prep school where he played for Coach Robert Prunty at Hargrave Military Academy. Meeks was listed as a four-star recruit. Clemson career: He graduated on Dec. 20 2012 with a degree in sociology. He was voted as a permanent captain on the 2012 team. He played in 50 games in his career and started 24, including all 13 in 2012. He finished his career with 157 tackles and had seven interceptions. He also had 13 passes defended. He was drafted in the fifth round by the Buffalo Bills in 2013.  Graduated? Yes. Hit or miss? Hit. 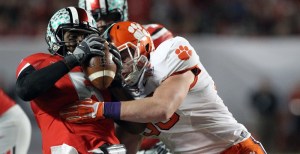 Linebacker Spencer Shuey ended his Clemson career with nine tackles, a sack and a recovered fumble in the Tigers’ win over Ohio State in the Orange Bowl last month.

Spencer Shuey, LB, Charlotte, N.C. – A three-star prospect, Shuey was rated as the 47th inside linebacker by ESPN. He was defensive MVP of the Shrine Bowl after recording seven tackles and two tackles for loss. He had 94 tackles and 10 tackles for loss at South Mecklenburg High School his senior year. Clemson career: He played in 49 games and started the last 20 at middle linebacker and weakside backer. Shuey was one of the smartest players to play the position. He was a real student of the game which he used to his advantage. He finished with 248 tackles in his career, including 12.5 tackles for loss and two sacks. He recorded nine tackles, a sack and a fumble recovery in Clemson’s win over Ohio State in the 2014 Orange Bowl. Graduated? Yes. Hit or miss? Hit.

Darrell Smith, TE/DE, Gadsden, Ala. – Not highly thought of coming out of high school. He played in the Mississippi vs. Alabama All-Star game. Clemson career: He played in 50 games over four years and started three of them, but he never played defensive end. He was one of the Tigers’ top special teams’ players and was a valuable blocker from his fullback and tight end positions. He had 26 special teams’ tackles during his career. Graduated? Yes. Hit or miss? Hit.

Brandon Thomas, OL, Spartanburg, S.C. – Thomas was a three-star recruit that was rated by ESPN as the No. 66 offensive guard in the country. He was a Shrine Bowl selection. Clemson career: Thomas started his Clemson career at left guard as a reserve offensive lineman, but he took over the left side in 2011 alongside Phillip Price at left tackle. When Price was injured near the end of the season, Thomas moved over to left tackle where he stayed the rest of his career. He played in 49 games with 36 starts and had 100 career knockdowns. He was a two time All-ACC selection and a two time ACC Academic Honor Roll member. Graduated? Yes. Hit or miss? Hit.