In a weird way, Clemson can thank the late, great Ohio State coach Woody Hayes for getting the commitment it got on Wednesday from offensive tackle Mitch Hyatt.

Hayes’ punch of Clemson defensive tackle Charlie Bauman more than 35 years ago in the 1978 Gator Bowl set off a string of events that ultimately led Hyatt’s uncle, Dan Benish, to Clemson, where the five-star recruit himself is now headed.

Hyatt, an offensive tackle, verbally committed to Clemson on Wednesday night in a ceremony at North Gwinnett High School in Suwanee, Ga. Hyatt (6-6, 275) currently is the No. 4 overall player in the country for 2015, according to ESPN.

So how did Hayes’ punch set the wheels in motion for the Tigers to land a verbal from the highest rated offensive tackle in the program’s history?

But when he got to the airport to fly to Columbus that Friday night, the airline had no reservation from Ohio State waiting on him.

“When I called down there, they said Woody was my recruiter and when he left he took all of his records with him, including mine. I was left with nowhere to go,” said Benish, who went on to play in the NFL for six years with the Atlanta Falcons and Washington Redskins, while helping the Redskins win Super Bowl XXII in 1987. 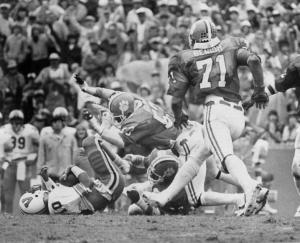 Former Clemson player Dan Benish (71) played for the Tigers from 1979-’82. His nephew, Mitch Hyatt, verbally committed to play at Clemson in 2015 on Wednesday night. He chose Clemson over Ohio State and Georgia.

But luckily for Benish—who played defensive tackle at Hubbard High School in Hubbard, Ohio—he went to the airport with a friend named Dwayne Sells, a wide receiver on Benish’s high school team that was being recruited by Clemson. Assistant Coach Mike Bugar, a native of the Youngstown area, was recruiting Sells and had spoken with Benish a few times as did head coach Danny Ford.

“Dwayne told me Coach Ford had been asking about me and that I should just join him on the trip since I could not go anywhere. Coach Bugar had been recruiting me, but I was not interested. But Dwayne’s suggestion was better than going home.

“I was planning on being on a recruiting trip so my parents and everybody thought I was going to Ohio State and I ended up going to Clemson that weekend.”

And he ended up falling in love with it.

“I came down here by accident and fell in love with the place,” Benish said. “When I went back home and told everybody I wanted to go to Clemson, they were like ‘You are crazy! What is Clemson? Where is Clemson?’ They did not even know.”

Clemson fell in love with Benish, too. Ford offered the 6-foot-6, 270-pound defensive tackle his final scholarship that weekend and Benish accepted it.

“I was going down there just for a vacation trip,” Benish said. “That is the way it started out in my mind, but once I got down there and I saw what they had and what they were doing. I just got a really good feeling about it.

“It is so funny because Ohio State did not win much back then. I think they may have won one Big 10 title, but we ended up playing for the national championship and winning it.”

“When Woody punched Charlie Bauman that pretty much changed the direction of where my life was going at that time,” Benish said.

And it ended up setting the direction of his nephew’s life. It’s hard to imagine Hyatt would have committed to Clemson over Ohio State Wednesday had his uncle not ever stepped foot on Clemson soil 35 years ago on a recruiting trip that he thought was just a vacation.

Hyatt has been on the Clemson sideline even before he was recruited to Clemson because he came up with his uncle during those special weekends when the 1981 team was honored. Benish was a starting defensive tackle on the national championship squad, starting 10 games, while playing in 11 overall. He recorded 67 tackles that year and had 10 tackles for loss, including two sacks.

“He likes the small quant atmosphere at Clemson. He is very similar to the way I am,” Benish said. “That is what drew me to Clemson. I told Clemson from the very beginning that Mitch was a Tiger. He was theirs to be lost. Unless they screwed it up somehow, he was coming to Clemson.

“Fortunately, they did not do that. Coach (Dabo) Swinney is doing a very good job and Mitch likes what he is trying to get done there. He likes the type of offense they run, though he understands Coach (Chad) Morris might not be there by the time he finishes high school. But he knows Coach Swinney will be able to fill that void whenever that comes up so that was not a big concern. He does like Coach Morris, however. But he has always been a Tiger sort of speak.”

Benish lettered at Clemson from 1979-’82 where he was part of one National Championship, two ACC Championships and participated in two bowl games. During his junior and senior years, the Tigers combined to go 21-1-1, the greatest two-year stretch in Clemson history.

“Clemson is starting to get back to where they were back in the early 1980s when I was there,” he said. “We played  hardnosed smash mouth football. We may not have won every game, but people knew they played Clemson. That was something we hung our hat on. We just did not give games away. If someone wanted to beat us, they had to line up and beat us.

“I think Clemson is getting to that point. They are not there yet. It has been talked about a lot and Mitch says he plans on beating South Carolina when he comes here. I feel the program is back on the upswing. They have had a couple of years of consistency behind them and now they just have to close the gap and get to the point and the pinnacle where everybody wants them to get to again.

“Mitch wants to be a part of that. He loves the fact Deshaun Watson is on campus and he likes all of the other players he has met so far. He is excited about trying to help in the recruiting process and getting other kids to come here next year. That is part of the reason why he committed early. He wants to be a leader, not a follower. He wants to show Clemson can bring in top quality talent and they are going to be something to reckon with down the road.”