Wintry weather has gripped the upstate again, but this time it’s serious.

The last storm—you know, the two inches of snow that baffled Atlanta for two days—was child’s play. It was nothing but a dusting of the white stuff that melted away by lunch time the next day.

No, this storm has ruined the week for some people, dropping several inches of snow, sleet, and ice on us. Arguably the biggest college basketball game of the season (UNC-Duke) was just postponed because no one can get anywhere if it requires a four-wheeled vehicle. High school playoff schedules, meticulously crammed in before spring sports take over, have been thrown into upheaval.

As many in this part of the country were paralyzed, I decided to take some time to get in touch with my youthful side. In my six-year stint as a student at Clemson (don’t worry, I now have two degrees), we only had two major snowstorms that I can remember. I spent very little time outside during that time because of my fear of icy roads.

But today, I made the short walk to campus from my apartment and went sledding with friends. I felt a little bad about it because generally I would be working in some capacity, but the diversion was good for me. It helped me enjoy a day without worrying about work for the first time in several weeks.

I saw some friends, new and old, and we spent a few hours scouring campus to look for places to sled. I’m only 24 years old, but sometimes I feel much older because of the responsibilities I have and the toll that constantly working takes on the body.

That wasn’t the case as I spent a Wednesday afternoon sliding down snowy embankments.

No, in this moment, the kid in me rose to the surface. I felt like a student again, which was an emotion I wish I felt more often while I actually attended Clemson. I sacrificed fun for work a bunch in college, and I appreciate what those decisions have allowed me to experience. But that doesn’t mean I don’t regret missing out on more fun events with my friends sometimes.

It was just fun.

Once I got home, it struck me that watching athletics as fans should be more like sledding on a snow day than everyday life. It should be about mindless cheering, camaraderie, unconditional support, and enjoyment.

Instead—and I am as guilty of this as anyone—watching games has become about griping, complaining, dissatisfaction, stats, expectations, pretending to know better than coaches or administrators, and reacting to every little thing that happens. It can be a stressful exercise, not a respite from the difficulties of the world.

Fandom has become like another job for us, not an escape from the daily grind. It’s an obligation, not a privilege. It’s serious business, not fun entertainment. It’s more about the bottom line than the experience.

I was disappointed when I assessed my own role in this. Where and when was fandom redefined? Somewhere, sports became so serious that it now blends in with the rest of our lives, when each time we experience a sporting event should probably be more like going sledding.

But I know how much fun I had sliding down hills today, and if every game could make me feel that way, I’d take it. 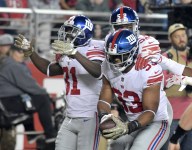 Swinney: Don't buy into what things look like in September