Line up and play football, Nick

Line up and play football, Nick

As much as Nick Saban probably does not want to read or hear this, if he wants to stop the up-tempo offenses that are starting to dominate college football these days, then he only needs to go back and watch what Pete Carroll and the Seattle Seahawks did in Super Bowl XLVIII.

I know Saban did not have much success in the NFL when he was the head coach at Miami, but he could learn a thing or two from Carroll, who won a couple of national championships of his own at Southern Cal and is now a Super Bowl Champion head coach.

The Seahawks were very physical and fundamentally sound as they made Peyton Manning and the NFL’s top offense seem weak, dazed and confused for much of the night in Seattle’s 43-8 victory.

“At the end of the day, it’s still about being physical,” Clemson defensive coordinator Brent Venables said prior to the Tigers’ victory over Ohio State in the Orange Bowl. “There are times that people get caught up too much in the schemes of it, and I really believe that. They lose sight of the fundamentals of the game.”

Could it be that this is what is going on with Saban and Arkansas’ Bret Bielema, who have spoken out against the up-tempo offenses? They say it is because they are concerned about how it might cause more chance for injury, though there is no physical proof to back up their claims.

It is more likely because for the first time in his career as a head coach, Saban cannot slow down an offense – take a look at the success Auburn, Texas A&M and Oklahoma have had on his defense in the last two years.

However, their statements, along with Air Force coach Troy Calhoun, chair of the football rules committee, has caused the NCAA to look into a new rule that might slow down offenses such as Clemson’s under Chad Morris and Auburn’s under Gus Malzahn.

The proposed change by the NCAA rules committee would prohibit offenses from snapping the ball until at least 10 seconds had run off the 40-second play clock.

The rule would allow defenses time to make a substitution without the offense changing players and with no fear the ball will be snapped before 29 seconds are left on the play clock. An exception will be made for the final two minutes of each half, when the offense can snap the ball as quickly as it wants.

The proposal needs approval from the playing rules oversight panel, which is scheduled to consider the ruling on March 6.

Morris showed his disproval for the possible new rule in a tweet last week, while a former Clemson assistant coach Rich Rodriguez—now the head coach at Arizona—called the proposed ruling “ridiculous.”

Venables, who was asked about the new-age offenses prior to the Orange Bowl, says it just something defenses coaches have to learn to adjust to.

The Tigers’ defensive coordinator knows a thing or two about what he is talking about. He spent years defending the up-tempo spread offenses of the Big 12 before coming to Clemson two years ago where he has turned around a unit that was one of the worst in the ACC in 2011 and made them one of the best this past season.

In the Orange Bowl, he held Ohio State’s up-tempo offense, run by quarterback Braxton Miller, to a season-low 193 rushing yards – 124 yards below its season average coming into the game.

“From a defensive standpoint, that’s one way to try to counter. They snap it really fast. Why are they snapping it really fast? Because defenses have a hard time getting lined up, getting the call, getting it communicated, getting their hand in the dirt, playing with technique and fundamentals. But what if you could neutralize that? That’s what we say.”

For the most part Clemson has done a decent job of neutralizing those kinds of offenses, though Venables is like any defensive coach and prefers to line up against a pro-style type squad like Virginia Tech’s each week. But that’s not the case. The game has changed. The rules are more geared for the offenses to score a lot of points and sell tickets.

To him, it is not about complaining about tempo and how it can cause more injury. Instead, it’s about finding a way to adjust and to slow these offenses down.

“That’s our first and foremost goal,” Venables said. “To have an opportunity to start, you’ve got to able to put your hand in the dirt, get your eyes where they belong, and play technique and play with toughness and being physical. If you can do that, you’ve really neutralized the whole really fast‑paced no huddle. Then it comes down to precision, execution, fundamentals, pad level, keys, discipline and all those things. What if you’re able to do that?

“So the management from a defensive standpoint both with your players and your coaches is what’s critical. Again, it’s not about that 62‑mile‑an‑hour blitz you’ve got dialed up as much as it is getting everybody lined up, getting them where their eyes are supposed to be, getting their hand in the dirt, have gap integrity, keep the ball inside in front and then play with great effort and being physical.

“But you don’t get that at the clinic,” he continued. “You get all these neat coverages, rotations and three-, four- and two‑man fronts, while dropping nine and bringing nine and all those types of things. To me, that’s what’s critical to have an opportunity to defend these types of teams.” 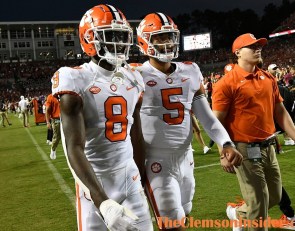 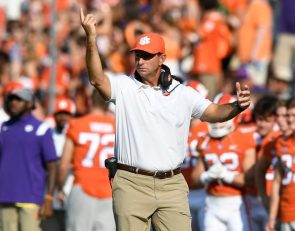 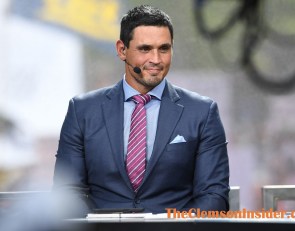 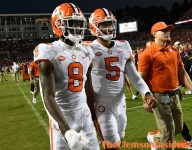 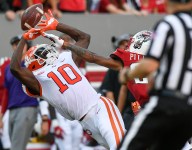