“There are not a whole lot of NBA guys at Wilmington and Wright State. I will tell you that,” the Clemson coach said with a smile. “There are not thousands of them at Clemson, either, by the way.”

But there is one and that could change the way big-time recruits look at Clemson and its basketball program in the future. Forward K.J. McDaniels’ name is consistently starting to pop up on NBA Drafts all over the internet.

Though Brownell would love for McDaniels, a junior, to come back to Clemson for one more year, he also understands having a player on his roster that is being talked about as an NBA player is a good problem to have.

“There is no question that is something we talk about in recruiting and that helps us,” Brownell said. “K.J. has been great for that because of his development.”

See McDaniels has grown as a potential NBA basketball player under Brownell’s tutelage. When he came to Clemson from Central Park Christian in Birmingham, Ala., McDaniels was considered a three-star prospect according to most of the national recruiting services.

Like everyone else, Brownell and his staff recognized McDaniels’ raw athletic ability. He was a good player with a decent shot but he had a lot of things he had to work on – such as his dribbling, especially with his off-hand.

He also had to improve on his skills when he did not have the basketball in his hands. 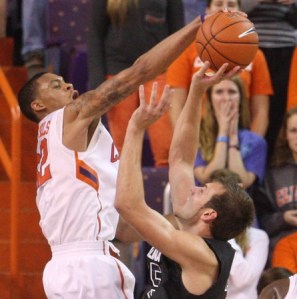 Clemson’s K.J. McDaniels can become only the second ACC Player to lead his team in scoring, rebounding, steals and blocked shots in a single season.

“I did see a guy who could become a very good player here,” Brownell said. “I saw a guy that I thought we could get to make some perimeter shots. He had a decent shot, but I thought that would get better. I knew because of his athleticism and the way he covered ground with dribbles that as he got older, stronger and comfortable, he would be able to take advantage of certain situations.

“You saw some of it last year in the drastic steps that he took as a sophomore so we had an inclining he could play his way into this kind of a situation.”

The situation McDaniels has played himself into is a possible First-Team All-ACC selection. McDaniels leads the ACC in blocked shots, as well as being one of the league’s best scorers and rebounders too. He has a chance to become only the second player in ACC history to lead his team in scoring, rebounding, blocked shots and steals in a single season.

“We felt like he could make the next step because we knew he still had a huge step to make and he has done that,” Brownell said.

McDaniels has also improved away from the ball and, with the exception of the Wake Forest game earlier this week, he has found ways to help his team win games even when he is not scoring.

“He is affecting winning and he is doing it by more than just scoring points. He is certainly our most valuable player and one of the best players in the league and because of that he is helping our team win.”

He is also helping the Tigers recruit. Because McDaniels has grown as a player since coming to Clemson, it’s easier for Brownell to go to the home of some of the nation’s best recruits and sell them not only on Clemson, but sell them on how his program can give them the opportunity to live out their dreams.

That’s how the Tigers got top-100 player Donte Grantham to come to Clemson. The 6-foot-8 small forward chose Clemson over Michigan.

“I think he helped some with Donte Grantham,” Brownell said. “(McDaniels’) next step was not taken yet, but we certainly talked about it to Donte Grantham. Here is a guy that made a huge step as a sophomore and he is being invited to all these summer camps and is having this opportunity. He is going to take another step as a junior.

“Donte really liked K.J. when he visited, too. Those guys were friends during the visit. K.J. did a great job as a recruiter in terms of helping us. I do think that was another little thing that helped.

And that dream is playing in the NBA. 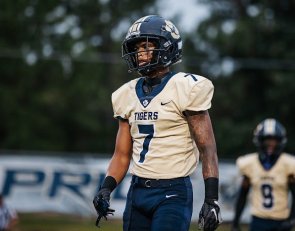