Former Clemson stars Brian Dawkins and Rodney Williams will be inducted into the South Carolina Athletic Hall of Fame later this year.

The eight individuals will be enshrined with the state’s highest athletic honor on May 12 at the Columbia Metropolitan Convention Center. Tickets (table of eight for $500) and program sponsorships may be purchased by calling the SCAHOF office at 803/779-0905. The affair, which includes a reception and dinner, begins at 5:30 p.m.

Dawkins played in the NFL for 16 seasons after a successful career at Clemson where he was a three-year starter at free safety in (1993-95). He finished Clemson with 247 tackles and 11 interceptions, and in 1995 was a second-team All-American by the Associated Press and Sporting News. He was first team All-ACC in ‘95 and second team in ‘93 and ‘94.

Dawkins finished eighth in the nation in interceptions during his second season, having set a Clemson record for most interceptions in a quarter against Duke with three in ‘95 and was named Sports Illustrated’s national defensive player of the week for that performance. Dawkins finished his career third in Tigers history in tackles by a defensive back. 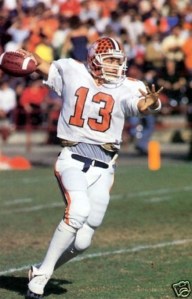 Former Clemson quarterback Rodney Williams went 32-8 as a starting quarterback and guided the Tigers to three ACC Championships from 1986-’88.

Williams completed his Clemson career (1985-88) as the winningest starting quarterback in ACC history with a 32-10-2 overall record. He established Clemson career records for passing yards (4,647), pass completions (333) and pass attempts (717) while setting career record for most starts regardless of position (44).

Williams finished his Clemson career in second place in total offense with 5,510 career yards and was a standout in bowl games as he was 41-of-79 for 564 yards in four bowl games. Williams was named most valuable player of the 1986 Gator Bowl and the 1988 Citrus Bowl, and became the first player in Clemson history to be MVP of two bowl games.