Clemson’s best coaches: Tigers set out to be perfect

Clemson’s best coaches: Tigers set out to be perfect

“It was early in my career as a head coach and Georgia was way up in the national headlines,” former Clemson head coach Danny Ford said. “Clemson was not in the headlines at the time from a national standpoint.”

Clemson picked off Georgia quarterback Buck Belue five times and forced what is still a school record nine turnovers in a 13-3 victory over the fourth-ranked Bulldogs. The nation was stunned. Clemson all of sudden was getting loads of media attention.

ABC immediately sent a crew to Clemson to interview Ford, whose team was a mere 6-5 the year before.

“They were talking about how this had to be a great win and all of this, and it was, but anytime we beat Georgia it was a great win,” Ford said. “The importance of getting recognized for beating Georgia was more important to our players than the national exposure because it was such a great rivalry.

“It was a way of getting some attention back when Clemson was not getting attention. Clemson does not have to worry about attention these days. They have plenty of attention because of the progress they have made and because of the players of the past and all of that.”

Though he will not give himself credit for it, Ford played a big role in why Clemson is known nationally. After the Tigers’ win over Georgia that year they catapulted on to the national scene and used it as a springboard to their own national title run.

Overall, Clemson only allowed three teams to score more than 10 points in 1981—Wake Forest, South Carolina and Nebraska—and it went 18 quarters without giving up a touchdown during one stretch.

“We didn’t want people to score on us, and we wanted to physically dominate people,” linebacker Jeff Davis said. “In a sick way, that was our joy. Yeah, we may not have beaten everybody by 21 points, but your body and your mental state of mind said we beat you by 21 points.

“That’s the kind of football we played. We had no reason for how great we were playing.” 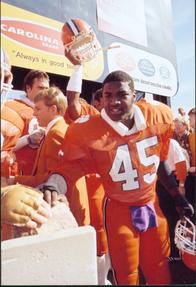 Jeff Davis and the Clemson defense allowed three teams to score more than 10 points in 1981—Wake Forest, South Carolina and Nebraska—and it went 18 quarters without giving up a touchdown during one stretch.

Just 33-years old, Ford became the youngest coach in college football history to win a national championship, which still holds true today. He was a fiery coach who coached off his players’ emotions.

Ford knew what buttons to push to motivate individuals and his team.

“He was a tough guy,” Davis said. “He was very well respected. He had fire in him, and we fed off of that. He basically took what Charlie Pell started and took it to the next level.

Davis recalls if it wasn’t for Ford and his staff keeping them grounded, especially after the 13-3 win over Georgia, things might have been different in 1981.

“The coaching staff did a good job of keeping us focused, keeping our goals out there and understanding that some great things can happen if we keep on playing the way we had been playing,” he said. “I think that’s why we won the national championship because we never really bought into the hype.

With every passing week, critics from around the country predicted this would be the week the Cinderella story from the small Upstate town would end. But each week the Tigers found a way to win. When the offense finally got things going in the second half of their 21-3 victory over Kentucky, Clemson became a runaway train that ran over anything in its path.

After the win over Kentucky, the Tigers steamrolled Virginia, 27-0, then scored 31 points in the second and third quarters in a 38-10 win at Duke. The offense then rushed for 304 yards in a 17-7 victory against N.C. State, before the record-setting 82-24 afternoon against Wake Forest on Halloween.

But the game that told the team, the coaching staff and the national media that 1981 was the year of the Clemson Tigers – was their 10-8 win in Week 10 at North Carolina. On that afternoon, the Tigers won a hard fought, tough and physical football game, against a North Carolina team that finished the year 10-2 and ranked in the Associate Press Top 10.

Clemson went on to wrap up the ACC Championship – its first goal – the following week in a 21-7 win against Maryland. It was just the Tigers second victory in 10 years against the Terps and first since a 28-24 victory, which wrapped up the ACC title in 1978.

The following week against rival South Carolina, Clemson closed a perfect regular season for the first time since 1948 with a 29-13 win in Columbia, bringing everything full circle and setting the stage for the greatest moment in Clemson football history.

“That (1980) season balanced our attitude even though we had success early. There was no reason for us to get the big head,” Davis said. “There was still a lot of work to be done and we were fortunate to be in the position we were in.”

The Tigers moved into the No. 1 spot a week after they concluded the regular season. Penn State beat Dan Marino and previously undefeated and No. 1 Pittsburgh, 42-14, that week, propelling Clemson to the No. 1 position as it headed to play Nebraska in the Orange Bowl on New Year’s Day.

“We know we have one more thing to do,” Ford said. “I’m just like everybody else. I want to see how good Clemson is. We’ve proved already that we’re a great football team. The only thing that stands in our way now is Nebraska. 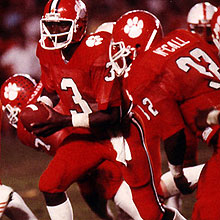 When Homer Jordan and the offense finally got things going in the second half of their 21-3 victory over Kentucky, Clemson became a runaway train that ran over anything in its path.

The 1982 Orange Bowl was Clemson’s first Orange Bowl appearance in 25 years. Jordan, the game’s Most Valuable Offensive Player, completed 11 of 22 passes and had 180 yards of total offense in leading the Tigers, while Davis, the Defensive MVP, had 14 tackles. Smith, now on the Clemson Board of Trustees, had a career high 10 tackles to lead the linemen.

Clemson allowed just one pass completion in the second half.

“No matter what they say, nobody else in the country has done what we’ve done this year,” Ford said after the game. “We beat the No. 2 team (Georgia), the No. 4 team (Nebraska) and we beat the No. 8 team (North Carolina). We’ve beaten three teams in the top 10 and nobody else has beaten even two.

After trailing Nebraska early thanks to a Mike Rozier to Anthony Steels halfback pass, the Tigers rallied to take the lead for good in the second quarter. Running back Cliff Austin ran in for two yards with 3:56 to play in the first half for a 12-7 halftime lead.

In the third quarter Jordan found wide receiver Perry Tuttle in the left hand corner of the end zone for a 19-7 lead and then kicker Donald Igwebuike was true from 36 yards—his third field goal of the night—to extend Clemson’s lead to 22-7 before the fourth quarter began.

The Cornhuskers tacked on a fourth-quarter score to make things interesting, but the Clemson defense shut down the Big Red offense on their final extended drive, then the Tigers’ offense held on to the ball for nearly five-and-a-half minutes to run down the clock to six seconds. Andy Headen deflected Mark Mauer’s desperation pass to preserve the win and the National Championship.

“That thing has marked us for the rest of our lives. I know it has for me, anyway. No matter what it is, the car business, the ministry, the fundraising – I expect to be the best at what I do. That is how you know it is real.”

Clemson began the 1981 season unranked and unproven, but when it was all said and done, the Tigers were the only undefeated and untied team in the country. They may not have looked perfect at times, but their 12-0 record said otherwise.

“They were a terrific group and they set out to accomplish one goal, and that was to be perfect,” Ford said.

Editor’s note: Part of this story was an insert from the book I co-authored last summer called Clemson: Where the Tigers Play, which you can buy on amazon.com. This is the ninth in a series of stories that chronicles how these coaches turned Clemson into the football power it has come to be over the years.