Time to speed up the tempo

Time to speed up the tempo

Clemson offensive coordinator Chad Morris chuckled when a television reporter asked him Monday if he considered slowing down his high-tempo offense this Saturday in Tallahassee, Fla., to keep Florida State’s Heisman Trophy winning quarterback, Jameis Winston off the field.

Morris said he does not want to go slow, but instead a little faster. It was obvious in the S.C. State win that the 22nd-ranked Tigers were moving at a faster pace than it did in the loss at Georgia to open the season.

“I tried to take a lot of pressure off Cole (Stoudt) in that first game and I felt like it slowed us down in the check system,” he said. “That was by design. We still snapped the ball eighty times, but if I had to do it all over again, I would go fast as I possibly could go.”

Against S.C. State, the Tigers snapped the ball 93 times and averaged 7.9 yards per carry. The end result was 66 points scored by the offense and 735 yards. Clemson had nine scoring drives take less than three minutes and three of those were under two minutes.

“I think that is where our guys operate,” Morris said. “They operate very well when they are going fast. We snapped it ninety three times the other night and we very well could have snapped it over 100 times.

There are still some kinks to workout despite the increase in the tempo. Morris says some of the offensive linemen have been slow getting down into position and getting set.

“That’s been the number one key thing we have addressed is getting those guys set,” he said. “I’m not going to slow things down. We have to keep pushing it and if anything, we have to go faster.” 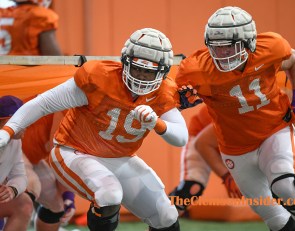