Tigers have opportunity to be in rare company

Only once in the history of the ACC has a league team upset the No. 1 team in the country on the road. The 22nd-Clemson Tigers will try to become the second team to do it when the Tigers visit Doak Campbell Stadium in Tallahassee, Fla., on Saturday.

No Clemson team, regardless of location, as ever beaten a No. 1 ranked team before. The highest ranked team the Tigers have ever beaten was No. 3 Florida State in 2003 in Death Valley and No. 3 Virginia Tech in 2011 ACC Championship Game.

“I don’t think we’ve got to play perfectly, but we’re going to have to play well to have a chance down there, that’s for sure.”

The only time an ACC school beat the top-ranked team on the road took place on November 3, 1990 when a 16th-ranked Georgia Tech team defeated number-one ranked Virginia Cavaliers, 41-38 in Charlottesville. Across college football, the number-one ranked team has lost in its home stadium just 31 times since the Associated Press began its poll in 1936.

It has happened  just three times since the turn of the century. The last time it happened was November 10, 2012, when Texas A&M won at number-one ranked Alabama, 29-24.

As of Thursday afternoon, the Tigers are list as a 16.5 point underdog.

Playing all over the place. Florida State running back Karlos Williams has played three different positions (LB, S, RB) during Florida State’s ACC and school-record 18-game winning streak. A safety his first two years, Williams filled in at linebacker in the game the streak started against Georgia Tech in the 2012 ACC Championship Game.

Williams’ 11 tackles and fourth-quarter interception led FSU to the 21-15 victory. Williams played safety in the 2012 Orange Bowl and 2013 season opener before moving to running back in the second game of 2013. Williams, who also plays special teams, was a backup running back through the Seminoles’ 2013 national championship run.

He now starts in the backfield for the Seminoles, who will put their nation-leading winning streak on the line against Clemson on Saturday.

Airing things out.  Miami freshman quarterback Brad Kaaya had a dominant performance against Arkansas State, setting a program true freshman record with 342 yards through the air in a 41-20 win.

The California native threw four touchdown passes and collected a 233.0 passer rating – the best by any Miami QB in at least 20 years. Kaaya’s efficiency for the season stands an impressive 155.08, the highest for any true freshman in the FBS. The two freshmen ahead of him are both redshirt freshmen.

Making things happen. North Carolina, who will come to Death Valley next week, has forced nine turnovers in its first two games. UNC has intercepted five passes and returned two of them for touchdowns.

Running hard. Pittsburgh running back James Conner’s 544 rushing yards (181.3 avg.) are the most in the opening three games of a season in Pitt history. The prior mark was held by Tony Dorsett, who had 487 yards as a freshman in the first three games of the 1973 season. Conner and the Panthers will be challenged by a rugged Iowa defense on Saturday that ranks sixth nationally against the run. The Hawkeyes are giving up just 65.7 yards on the ground. 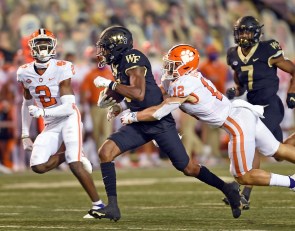