Tigers working with what they have

Tigers working with what they have

In all his years of coaching, including his 16 years as a high school coach in Texas, Chad Morris has never played with an offense that had only 14 players he could really play with.

But that is what happened Saturday night against Syracuse in Death Valley.

“But our guys are playing,” Clemson offensive coordinator Chad Morris said. “We have guys that are stepping in and are trying, but it has been one of those years right now and hopefully, you get this through your system and get guys back.”

Clemson, which did just enough to get past Syracuse, 16-6, in front of 80,031 fans will get a chance to get some guys back thanks to a 12-day break before the 20th-ranked Tigers head to Winston-Salem to face Wake Forest on Nov. 6.

If you take a look at the Clemson roster prior to camp, the Tigers have nine offensive players that were either injured or suspended for Saturday’s game or are no longer with the team.

Quarterback Deshaun Watson has a broken finger, reserve center Jay Guillermo has a broken foot, tight end Jordan Leggett has a torn meniscus, running back Adam Choice has a torn ACL, wide receiver Charone Peake has a sore knee, offensive tackle Isaiah Battle was suspended for the Syracuse game for violation of team rules, offensive tackle Shaq Anthony left the team in August and wide receiver Kyrin Priester was dismissed from the team after the Georgia game.

As for those that are injured, Clemson could get Guillermo back for the Wake Forest game, while Watson and Peake could be available for Georgia Tech. There is still no word on when Leggett will come back, but Swinney said he will be back before the end of the year.

Morris says he knew it was going to be that type of year when he lost his starting tight end, Sam Cooper, in the first game of the season in pregame warm ups.

“He breaks his leg running a route against air,” Morris said. “You probably should have known something then. You better hang on.”

Clemson (6-2, 5-1 ACC) is trying to hang on as much as it can. After averaging more than 40 points per game before the Louisville game, it has averaged just 18.7 points per game in the last three games – all wins of course. Since the NC State game, the Tigers have lost their starting quarterback (Watson), their reserve center (Guillermo), starting tight end (Leggett) and their starting running back (Choice).

Then of course there was Battle’s suspension on Saturday.

“I will say this, those that know these guys and know what they are going through and know the work they put in, my hat is off to our guys,” Morris said. “They don’t gripe, they don’t complain. We have changed the way we have practiced, they keep up and they keep responding.

Morris said he challenged his players at halftime to take care of the ball and for somebody to make a play.

That guy was running back Wayne Gallman. The freshman rushed for 101 yards on 28 carries, including 22 rushes for 84 yards in the second half. He was the first Clemson running back to go over the century mark this season.

“I did what I had to do,” Gallman said. “That’s what I have wanted to do ever since I came here. We have a committee, but it is in our mindset to get in and do whatever it takes to help the offense.”

Besides Gallman, quarterback Cole Stoudt also stepped up. After throwing his second interception of the game in the third quarter, the senior came back to throw a 19-yard touchdown pass to tight end Stanton Seckinger in the fourth quarter that gave Clemson a 10-point lead with 14:28 to play.

Stoudt also teamed up with Gallman on the game’s final drive as the Tigers’ ran out the last eight minutes and 17 seconds.

“I’m very proud of those guys, I am,” Morris said. “Our guys are fighting as hard as we have ever fought. We just don’t have many to fight with, but we are going to keep fighting.”

And as Gallman said they are fighting with what they have to work with, even if it is just 14 players.

“We ain’t got much, but we got all we need,” Morris said. “These guys have to take that mentality and keep coming and growing together. We are going to get guys back over the next few weeks and it is going to provide depth and it is going to add life to us and breathe fresh air. 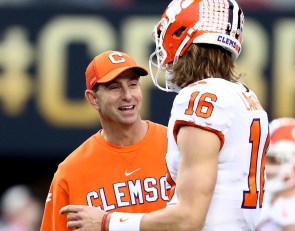