Imagine what Wake Forest quarterback John Wolford will be looking at tonight when he scans the Clemson defense for the first time when the 19th-ranked Tigers visit BB&T Field in Winston-Salem, N.C.

On one side of the defensive front he will see All-American defensive end Vic Beasley, one of the nation’s leaders in sacks. In the middle there is Grady Jarrett, who Wake Forest head coach Dave Clawson calls one of the best defensive tackles in college football.

On the other end of the line stands Corey Crawford, a guy who does not get as much fame as Beasley does, but his play is consistent and relentless as anyone else’s on the defense. At middle linebacker is Stephone Anthony, who is having an All-American type season himself.

It’s hard to imagine what Wolford might be thinking at times when he lines the Demon Deacons’ offense up tonight.

“Yeah, I can imagine it because I watch it every day in practice,” Clemson head coach Dabo Swinney said. “I stand back there in team-pass and sometimes I’m like, man! I mean, let’s go to the next play because no one else is going to block them either.”

And no one has.

Clemson’s defense has consistently put pressure on opposing quarterbacks the last two years. The Tigers rank third nationally in sacks with 30 already this year and on are pace to eclipse last year’s mark of 38 sacks by season’s end.

“When you affect the quarterback like that, it speaks a lot about your front,” said senior defensive tackle DeShawn Williams.

Clemson’s front four has dominated just about everyone it has played this season and opposing quarterbacks have been paying the price because of it. The Tigers sacked Syracuse quarterback A.J. Long four times the last time out and prior to that Orange quarterbacks were only sacked five times all season.

“We wanted to let him know this was big boy football so any chance we got, or on any opponent’s quarterback we get, we want to make our presences known,” said Williams, who recorded one of the Tigers’ four sacks against Syracuse. 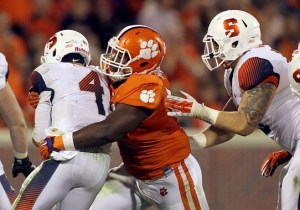 Defensive tackle Grady Jarrett and the Clemson defense sacked Syracuse quarterback A.J. Long four times on Oct. 25. The Tigers have 30 sacks through eight games this year, which ranks third in the country.

The Tigers (6-2, 5-1 ACC) recorded five sacks against Boston College, Louisville and Florida State, and had at least three sacks against S.C. State, North Carolina and NC State. Only once this year did Clemson not sack the quarterback three or more times in a game and that came at Georgia in the season-opener.

Those are numbers that do not bode well for a Wake Forest offense that has already yielded 31 sacks this season.

“Even if we don’t hit him we want to be in his ear and let him know that on the next play we are going to be there,” Williams said.

Clemson brings pressure from all different angles. Not only does it come from Beasley, Crawford, Jarrett and Williams, but defensive coordinator Brent Venables will mix in zone concepts that will have pressure coming from the safeties, off the edges with the cornerbacks or up the middle with his linebackers. He also stunts his defensive tackles and ends and will bring fire blitzes into the gaps with his safeties and outside backers.

“You don’t want to have the quarterback comfortable in the pocket all day,” Jarrett said. “You want to get him moving around in the pocket and get that pressure on him.”

In practice when Clemson works its first-team offense against its first team defense, the coaches call it team-pass, but this year they have a different name for that part of practice is called.

“We call it team-dial-a-blitz. They are coming every day,” Swinney said. “It is great. It is great for our guys. It is great competition when you have to go against excellent players in practice. It is really good for our young guys. Think about what (Tyrone) Crowder is getting baptized with every day out on that practice field.”

Think about what opposing quarterbacks are going through. Williams recalls several instances when he has seen fear in the quarterback’s eyes. He said Louisville quarterback Reggie Bonnafon looked intimidated at times as was Syracuse’s Long.

The Tigers produced a combined nine sacks in those two games as well as countless other pressures and hits on the two quarterbacks.

“You can see it. They want to get the ball out early,” Williams said. “It messes up the timing with their receivers and with that you get PPUs or interceptions so we want to do a good job of affecting the quarterback.”

Getting hits on the quarterback or sacking him takes a toll on him as well as his offensive line.

“It frustrates the whole offense because the offense is built around protecting the quarterback,” Jarrett said. “They want, with all the protections and those things, to put him in position not to get hit so when we get there and hit him, it is not only affecting him, but it is affecting the whole offense, too.”

And when that happens, the quarterback all of sudden becomes a helpless deer that has strayed away from the rest of the pack and is defenseless to the Tiger that is lurking in the weeds.

Can you imagine what that feeling must be like if you were the quarterback?

“Yeah, I can imagine. It’s a tall chore,” Swinney said.