On November 20, 2004, the worst moment in the Clemson-South Carolina rivalry took place. It’s a moment that will forever be remembered in what is arguably one of the more intense rivalries in all of college football.

Now 10 years later, there are still a group of fans on both sides that cannot tell you who won the game or what the score was, but they all remember “The Brawl.”

“In retrospect, it should not have had happened,” former Clemson running back Yusef Kelly said.

Kelly, who these days works as a law enforcement officer in Easley, S.C., will always be linked to the worst moment in the history of the rivalry thanks in large part to a picture that shows him kicking a South Carolina player—whose helmet is off—in the head with his right foot.

“It is kind of a catch-22 because you know in sports there is always somebody bigger and better coming behind you and a lot of people can be forgotten so I like it in the fact that people do remember or recognize me because of that, but at the same time it sucks because that is why they remember me,” Kelly said. “It’s not because of the other things I have done like the charity work or graduating from college in three-and-a-half-years.”

So how did it end up like this? How did Kelly’s four years at Clemson end this way? What moment started it? Who started it? And why did it escalate the way that it did?

“I’m all for letting people play as far as tackling to the whistle or something that could be consider close, but when people are getting punched and spit on, somebody needs to take charge and handle that situation.”

The referees in that game had a chance to take charge the moment the South Carolina players greeted the Tigers at the bottom of the Hill as Clemson made its famous entrance onto the field in Death Valley.

Soon after that both teams were seen throwing one-cheap shot after the other. The referees would throw flags, but no one was penalized as the officials chose to call off-setting penalties.

Kelly says Clemson likes to use the fact that South Carolina players taunted them as they came down the Hill as a reason why things got so bitter on that dreary day in Death Valley, but looking back he says that was just an excuse.

“I don’t exactly remember who threw the first punch or who spit on who first, but to me, them taunting us as we were coming down the Hill, that is not enough to say, ‘Okay, now we are ready to fight.’

“That’s dumb to think that way just because someone disrespected your tradition. That’s not enough to fight. It was the cheap shots. You don’t know who really started it, but that’s the reason it all got started.” 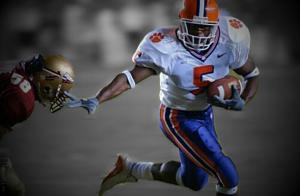 Yusef Kelly played running back at Clemson from 2000-’04.

It escalated on Clemson’s final drive prior to the fight when it appeared a few Carolina players were throwing a cheap shot or two on running back Reggie Merriweather. After Merriweather scored the game-clinching touchdown in the Tigers’ 29-7 victory, Williamson retaliated by shoving Newton’s face into the ground following a sack.

“When it happened, I did not think anything of it,” Kelly said. “I figured he might get a penalty, but when the Carolina player came and hit him, ‘I was like okay.’ Then when one of our players came to Bobby’s defense and hit that Carolina player, that’s when you definitely realized something is definitely about to happen.”

And then it happened. Soon the sidelines cleared. There are pictures of both head coaches—Clemson’s Tommy Bowden and South Carolina’s Lou Holtz—trying to hold back their players or pull them over to the sidelines.

“It was a chain reaction and you really did not even have time to think about it,” Kelly said.

Prior to that day, Kelly had never once gotten into a fight during his playing career, going all the way back to when he played little league football. He admitted to fighting with his friends and family members off the playing field while he was growing up, but never did he get into a fight during a football game.

“I never had the urge to do anything like that,” said Kelly, who is now a husband and father of two children. “When I got involved with it, it wasn’t because I was sitting there thinking I’m ready to fight because that is in me or that is how I came up. It was more so when I saw my teammate out their fighting, I better be in their helping him.

“It was not because of my attitude or any persona I projected. It was simply because that was my teammate. Right or wrong, if they are in there doing it, I better be in there helping them.”

As he looks back at “The Brawl” and his involvement in it, Kelly does not let that one moment, when he made a bad choice, define who he is.

“Some people might still call me a thug or whatever the case might be, but my whole thing is I’m all for sportsmanship,” he said. “I’m all about hit them with kindness.”

Kelly, who volunteers as a coach in the Easley Recreation Department, teaches his son Aalijah and his teammates to always help up the kid they just tackled on his 12-and-under football team.

“What people don’t realize is that between the two schools, most of the guys have either played with each other in high school or against each other in high school. There have been many times when myself and other guys have gone down to Columbia and hanged out with some of those guys on the weekend and they will come up and hang out in Clemson with us,” Kelly said. “The only time we did not like each other was in competition, but off the field that stuff did not matter.

“Yes, we would still talk junk, but we are still friends.”

Kelly still has a relationship with Newton and some other former Gamecocks who were involved in the brawl. Aalijah, 11 years old, actually attended former Gamecock and Carolina Panther Travelle Wharton’s football camp last summer and Wharton asked Kelly to help him coach in his camp this coming summer.

When the brawl was over and the dust settled, both universities decided that neither team would participate in a bowl game as part of the punishment and those that came back the following year were suspended for another game due to their involvement in the fight as well.

“It’s not as bad now as it was then, but it still shed a bad light on both programs,” Kelly said. “It was unfortunate that it happened. Looking back at it now, there were a lot of things that could have been done to have prevented that from happening.”

Reporter fired for wording in support for Watson