Here is how the ACC stacks up heading into Saturday’s ACC Championship Game between No. 4 Florida State and No. 11 Georgia Tech. How does the rest of the conference stack up after the regular season and where is No. 18 Clemson ranked?

1. Florida State (12-0, 8-0 ACC), last week No. 1: I can’t figure out why Florida State keeps falling in the College Football Playoffs Poll. They have been put on upset alert in games against Clemson, Notre Dame, Louisville, Miami and Florida and yet the Seminoles have found a way to win every game. Teams from other conferences have had similar situations and have lost at least one, yet they are given a free pass. Why? Guess what FSU fans your team is on upset alert again against Georgia Tech. You know what that means, right? If you win the ACC Championship by only a field goal or touchdown against the No. 11 Yellow Jackets your team is likely to fall out of the top 4. That’s what the trend says. I wonder what would happen if Alabama beats Missouri by just a few points in the SEC Championship Game? I bet you they will get praised for being so resilient and will probably increase their No. 1 status. What a joke. FSU should have lost a game then maybe the committee would have given them more credit for winning those games they found a way to win. Heaven forbid winning 28 straight games proves you are the best team in the country. This College Football Playoff thing is turning into a joke and that is disappointing.

2. Georgia Tech (10-2, 6-2 ACC), last week No. 2: Speaking of finding ways to win games. I still don’t know what Georgia head coach Mark Richt was thinking at the end of regulation. You are up three points – kick the ball deep. Unless the Yellow Jackets in epic proportion on Saturday then the Orange Bowl is theirs either way. Though I believe head coach Paul Johnson would love to call his team ACC Champions instead of runner ups.

3. Clemson (9-3, 6-2 ACC), last week No. 3: If Deshaun Watson was able to play the entire FSU and Georgia Tech games where would this Clemson football team be right now? My guess, it would be getting ready for an ACC Championship Game. How good is Clemson when Watson is quarterback? The Tigers averaged 43 points and 530.8 yards per game when he played more than one quarter. Against the Gamecocks last Saturday, he threw for 269 yards and two scores and ran for two more on a torn ACL. This kid is amazing. The Tigers appear to be headed to either the Citrus Bowl or the Russell Athletic Bowl. Both games are played in Orlando, Fla.

4. Louisville (9-3, 5-3 ACC), last week No. 4: Louisville truly has the best set of quarterbacks in the ACC and maybe the country. How else can you explain the fact they have lost two quarterbacks to injury, yet they keep finding a way to win? The Cardinals rallied to beat archrival Kentucky last Saturday with third string quarterback. Kyle Bolin, a redshirt freshman, came off the bench for the injured Reggie Bonnafon and rallied Louisville to a 44-40 victory. The Cardinals, like Clemson, will play in either the Citrus Bowl, the Russell Athletic Bowl or the Belk Bowl. Bonnafon, who injured his left knee, could be back in time for the bowl game.

5. Duke (9-3, 5-3 ACC), last week No. 5: The Blue Devils ended the season by winning just one of their last three games, but they did win nine regular season games and can win 10-games for a second straight season with a bowl victory. Speaking of bowl games, where will the Blue Devils spend the holidays. Though they are a candidate for the Russell Athletic Bowl, odds are Clemson or Louisville will go there depending on the Citrus Bowl situation with the Big 10. Duke in line for the Belk Bowl, Pinstripe Bowl and either the Music City Bowl or the Gator Bowl, it can’t fall any further than that. 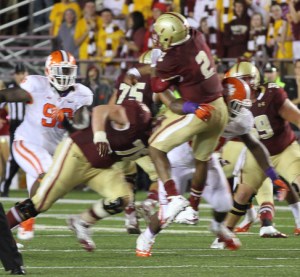 With its win over Syracuse last week, BC put itself in position for an ACC Tier I bowl game.

6. Boston College (7-5, 4-4 ACC), last week No. 7: A week after losing a heartbreaker to FSU, the Eagles bounced back by routing Syracuse and putting themselves in position for an ACC Tier I bowl game. BC’s in line to go to either the Belk Bowl, Pinstripe Bowl and either the Music City Bowl or the Gator Bowl, or one of the Tier II Bowls – the Military Bowl (Annapolis, Md.), Quick Lane Bowl (Detroit), Bitcoin Bowl (St. Peterburg, Fla.) and the Independence Bowl (Shreveport, La.).

7. Pitt (6-6, 4-4 ACC), last week No. 9: Pitt concluded the regular season with a solid 35-23 victory at Miami to become bowl eligible. Running back James Conner was named ACC Player of the Year. Conner led the ACC with 1,675 rushing yards. The Panthers are in line to go to either the Military Bowl, Quick Lane Bowl, Bitcoin Bowl, the Independence Bowl or the Armed Forces bowl because the Big 12 won’t fill its slot for the Fort Worth, Texas bowl.

8. NC State (7-5, 3-5 ACC), last week No. 11: No one saw NC State blowing out rival North Carolina last Saturday, but that is what happened. The Wolfpack rushed for 388 yards and needed only 14 points to beat what many considered to be the second best offense in the league. NC State closed the year be winning three of its last four games and could now possibly go to a Tier I bowl game, most likely the Belk Bowl.

9. Miami (6-6, 3-5 ACC), last week No. 7: What happened to the Hurricanes? At one point this season they were thinking of a much higher bowl. Now, following three straight losses to close the regular season including head scratchers to Virginia and Pitt, they could be looking at either a trip to Detroit or to Forth Worth for the Holiday season.

10. Virginia Tech (6-6, 3-5 ACC), last week No. 12: How is this team in a bowl game? The Hokies are the worst of all the bowl eligible teams, but give them credit for bouncing back after that horrible loss to Wake Forest and beating their rival to become bowl eligible. Virginia Tech made the necessary plays in the end to beat Virginia, including quarterback Michael Brewer’s 9-yard touchdown pass to Bucky Hodges with 1:48 remaining.

11. North Carolina (6-6, 4-4 ACC), last week No. 8: Dr. Jekell and Mr. Hyde reside in Chapel Hill this year. How else can you explain UNC hammering Duke one week, only to get hammered by a NC State team that has not had a quality win all year – not that I’m saying the Tar Heels are a quality win. But at one point, UNC was playing as well as anyone in the ACC. You know that saying, “You are only as good as your last game.” That implies here.

12. Virginia (5-7, 3-5 ACC), last week No. 10: The Cavaliers exceeded everyone’s expectations, yet they still finished last in the ACC Coastal Division. The loss to Va. Tech was especially disappointing when everyone figured this was the year they could beat the Hokies.

13. Syracuse (3-9, 1-7 ACC), last week No. 13: The Orange closed the year by losing eight of their last nine games and it was even close. Their five straight losses to conclude the year were all by double digits.

14. Wake Forest (3-9, 1-7 ACC), last week No. 14: A week after ending a six-game losing streak, the Demon Deacons were drilled by Duke. Thanks to their loss earlier in the season to Syracuse, the Deacons were clearly the worst team in the ACC this year. Now the question is, after playing so many young players, can they be better next year and make significant strides in year two under head coach Dave Clawson?