How Tigers got to the Russell Athletic Bowl

How Tigers got to the Russell Athletic Bowl

When 17th-ranked Clemson takes on No. 24 Oklahoma in the Russell Athletic Bowl next Monday in Orlando, Fla., the Tigers will be going for their 10th win of the season, which would mark just the second time in the program’s history that it won 10 or more games in a season for four straight years.

So how did the Tigers (9-3) get to the Russell Athletic Bowl?

I can’t believe they won that game! With quarterback Deshaun Watson knocked out of the game with a broken finger in the first quarter, defensive tackle DeShawn Williams knocked down Will Gardner’s fourth-and-goal pass from the two-yard line in the final seconds to preserve the Tigers’ 23-17 victory over a Louisville team that is now ranked No. 20. Williams knocked down the pass after Cardinals wide receiver James Quick took a slant pass 73 yards to the Clemson 8-yard line. Safety Jayron Kearse chased him down from behind to prevent the touchdown. After a first-down pass gained seven yards to the two, the Tigers stoned the running back on the next play which forced the Cardinals to have to clock the ball and loose a down. On fourth down, Gardner rolled right, stopped and fired across his body, which Williams knocked down for an incomplete pass. That started a massive celebration on the Clemson sideline.

Are you kidding me? Clemson lost to Georgia Tech with a little less than three minutes to go in the first quarter. That’s when Watson, who was returning for the first time since breaking his finger against Louisville on Oct. 11, went down with a knee injury. Three plays later Georgia Tech free safety Jamal Golden stayed home on a Cole Stoudt screen pass attended for tight end Jordan Leggett and returned it 85 yards down the near sideline for a touchdown. Instead of being up 10-0, the Tigers found themselves trailing. Stunned by the sudden change of events, Clemson never recovered as the Yellow Jackets rolled to a 28-6 victory at Bobby Dodd Stadium in Atlanta. Clemson finished the game with just 190 total yards against one of the worse defenses in the ACC and in the country in terms of total yards allowed. Stoudt threw three interceptions overall, including another one returned for a touchdown in the third quarter. The Tigers’ 59 passing yards were the lowest in one game since 1998. Clemson has just 107 yards of total offense after Watson left the game. The loss also ended the Tigers’ chances of making a second straight Orange Bowl appearance. 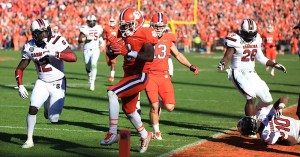 Photo by Kevin Vandervort
Clemson wide receiver Artavis Scott tip toes the sideline in the third quarter to score on a 70-yard touchdown in the Tigers’ 35-17 victory over South Carolina.

They needed that one. Order was restored in the Clemson-South Carolina rivalry. With the return of Watson and a dominating performance by the defense, Clemson ended its five-game losing streak to the Gamecocks with a 35-17 victory in Death Valley. Watson threw for 269 yards and ran for two scores, while the offense totaled 491 yards. Wide receiver Artavis Scott recorded 185 of those yards on seven catches, most coming on the jet-sweep pass plays, including two that went for touchdowns of 53 and 70 yards. Running back Wayne Gallman rushed for a season-high 191 yards and one touchdown as well. With the offense having its best game since the Tigers’ 41-0 win over NC State on Oct. 4, the defense harassed and frustrated USC quarterback Dylan Thompson. Clemson’s defense sacked Thompson four times as he threw for 249 yards on 21 of 39 passing. One of the sacks led to a fumble that turned the tide in the football game. The Tigers finished the game with 13 tackles for loss. Head coach Dabo Swinney revealed after the game that Watson played the game with a torn ACL.

My heart hurts after that loss: Clemson got inside the red zone four times and four times they came away with no points. The end result – top-ranked Florida State beat the Tigers 23-17 in overtime. FSU running back Carlos Williams rumbled 12 yards around the left side to end the game and broke the Tigers hearts. The game should have never come down to Williams run. Clemson outplayed, outhustled and outcoached the Seminoles all night, but when it mattered most the Tigers did not execute and it cost them what could have been a momentous victory. With the score tied at 17, Clemson had the game won when safety Jadar Johnson intercepted quarterback Sean Maguire at midfield and returned it 24 yards to the FSU 26-yard line with 2:14 to play in the game. All the Tigers had to do was hang onto the ball and the game was theirs, but defensive tackle Eddie Goldman stripped running back C.J. Davidson of the football and safety Nate Andrews recovered it at his own 14 with 1:36 to play. The Seminoles were content to play overtime from there and it paid off.