A champion of a different sort

A champion of a different sort

Have you taken the time to sit back and take in what Clemson accomplished on the football field in 2014?

Sure the Tigers did not win the Atlantic Division, the ACC or play in the College Football Playoffs this year. But who really expected them to in the first place? I know I didn’t.

I figured Clemson might win nine games or maybe 10 if everything went right. But when you think about what they went through, especially on the offensive side of the ball, winning 10 games was amazing.

Before the season even began the Tigers suffered a blow as perhaps their best, and most experienced, running back in Zac Brooks went down with a broken foot. After that the offensive line, which was already thin, lost one player to transfer and three other suffered injury just a month into the season.

Injuries in preseason camp, and throughout the season, derailed the progress of Jordan Leggett and Stanton Seckinger. By the Russell Athletic Bowl Clemson was playing with only one true tight end—Cooper—while the other one, Roderick Byers, started the year off playing defensive tackle. 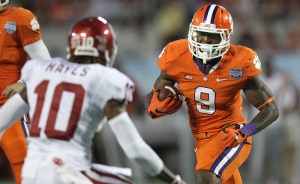 Running back Wayne Gallman rushed for 571 yards and scored three touchdowns in the final six games for Clemson.

With Brooks done, the running back position saw four different guys start at one point in the season. D.J. Howard opened the year at the starter, but his lack of big play potential and breakaway speed gave way to C.J. Davidson. But Davidson could not hang on to the football so freshmen Wayne Gallman and Adam Choice took over as starters. But when Choice went down with a season-ending knee injury at Boston College, Gallman took over from there as he gained 571 yards and scored three touchdowns in the final six games.

Quarterback was perhaps the most emotional rollercoaster ride of them all. Senior Cole Stoudt started the season but it became quite obvious in the Georgia game that the best guy for the job was freshman Deshaun Watson. The Gainesville, Ga., native eventually overtook Stoudt in Tallahassee and then threw for 435 yards and a school-record six touchdowns in his first career start against North Carolina. He followed that up with 329 total yards and four total touchdowns in a 41-0 win over NC State.

It appeared that the offense was finally clicking then disaster struck. Watson broke his right index finger against Louisville and missed the next three games and the offense slowed mightily with Stoudt running the show. It did not help that the senior was suffering from an AC joint injury in his left shoulder, either.

But Stoudt, with an offensive line that was playing just five players and with a running game that was nowhere near as productive as it has been in years past, was able to do just enough to help the Tigers get through a four-game stretch against Louisville, Boston College, Syracuse and Wake Forest without any losses. 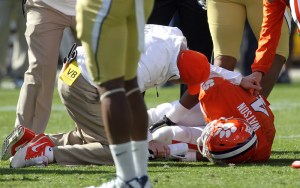 Quarterback Deshaun Watson blew out his left knee in the Tigers’ loss at Georgia Tech on Nov. 15.

Watson returned to the lineup at Georgia Tech in mid-November and he had the Tigers up three points and driving for seven more near the end of the first quarter when his left knee blew out and ended his afternoon. Stoudt was not prepared to come in and it showed as he threw an interception three plays later that was returned 85 yards for a Georgia Tech touchdown. He threw a similar pick-six in the third quarter that finished the Tigers off.

Stoudt quarterbacked the Tigers through another ugly win over Georgia State the following week and then Watson returned against South Carolina in the season finale in one of the more dramatic and gutsiest performances in the history of the long-standing rivalry.

The freshman threw for 269 yards and two touchdowns, while completing 14 of 19 passes as well as rushing for two more scores, all on a torn ACL in his left knee. The effort inspired the Tigers to have one of their more complete games of the season as they finally ended the Gamecocks’ five-game winning streak in the series with a 35-17 victory.

Of course we all know what happened in the Russell Athletic Bowl against Oklahoma. With Watson out after having knee surgery, the team rallied behind Stoudt, who saved his best game for last. The senior threw for a career-high 319 yards and three touchdowns, while completing 26 of 36 passes with no interceptions in a 40-6 victory.

Granted, Clemson had the nation’s best defense and that certainly helped the Tigers through the tough times, but I have seen Clemson teams in years past—1992, ’94, ’98, 2004, ’08 and ’10 come to mind— with great defenses struggle to win because of the deficiencies it had on offense.

But this Clemson team stayed together through the tough times and worked as one. They believed in and worked hard for each other. They won and lost as a team, while finding a way to win 10 games when really few believed they could.

So when you think about what the future holds for the Clemson football program in the coming months, don’t forget to look back on how it got there. The 2014 Tigers may not have won any championships, but it did something more, it showed future teams what it takes to be a champion.