Not a bad first year

Not a bad first year

By Will Vandervort / Photos courtesy Steelers.com.

Six games into the 2014 season the Pittsburgh Steelers were sitting at 3-3 and were looking for a way to get things going on offense. At that point they were about midway down the list in terms of passing and rushing yards had been held to 17 or fewer points three times.

The Steelers needed a jolt offensively. They needed another big-play threat other than Antonio Brown at wide receiver to help open things up. Though they did not feel he was totally ready, head coach Mike Tomlin and offensive coordinator Todd Haley activated rookie Martavis Bryant for the Steelers’ Monday Night encounter with Houston, hoping the former Clemson receiver could add a little something to the offense.

And he did exactly that.

Trailing 13-3 with fewer than two minutes to play, Bryant made the coaches’ move pay off when he got behind the Texans’ secondary for a 35-yard touchdown pass from quarterback Ben Roethlisberger. It was the first reception of his NFL career and it went for a touchdown.

“It wasn’t as hard as I thought it would be,” Bryant told Steelers.com recently. “It’s faster, guys are bigger, but not many things changed. You are just playing against better competition and that makes you better. I think I adjusted pretty well and I hope I can continue to grow.”

Bryant’s touchdown jumped started the Steelers’ offense and not just against the Texans. After the Steelers rallied for a 30-23 win over Houston, they followed that up by scoring 51 points against the Colts the next week and then 43 against the Ravens. 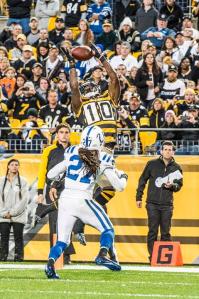 Former Clemson receiver Martavis Bryant scored 8 touchdowns this year for the Steelers, including two against the Colts in a 51-34 victory on Oct. 26.

In his first three games as a pro, Bryant totaled five touchdowns, tying him at the time for touchdown scored by all NFL rookies, including former Clemson teammate Sammy Watkins, who had played in all nine games at the time.

Bryant, who became the first player in NFL history to score at least one touchdown in his first four games as a pro, finished the year with eight touchdown receptions, which led the NFL for rookie receivers and was two more than Watkins recorded. He also had the league’s longest reception and offensive touchdown of the season, a 94-yard heave from Roethlisberger against the Jets.

“I had some ups and downs,” Bryant said about his first season in the NFL. “Sometimes I didn’t want to get out of bed, but I pushed myself to do it. I didn’t hit a rookie wall or anything, but there were times when your body is tired. It’s been an interesting season. I learned a lot from a lot of veterans and I am thankful.”

Bryant, who left Clemson following his junior season, finished the year with 26 receptions for 549 yards, which ranked third on the team. His 21.1 yards per catch average did exactly what Tomlin and Haley had hoped for. He gave the Steelers another big-play threat in the passing game, allowing the offense to open up even more for All-Pro wideout Brown and All-Pro running back Le’Von Bell.

The Steelers scored 27 or more points nine times in the last 10 games of the season after Bryant was activated and finished second in the league in total offense (411.2 ypg), second in passing offense (301.6 ypg) and seventh in scoring offense (27.2 ppg).

With Bryant in the lineup, Pittsburgh won 8 of its last 10 games as it rallied to win the AFC North Division and advance to the NFL Playoffs after a two-year absence.

“It’s crazy it flew by so fast,” the fourth-round pick said about his first season in the NFL. “It lets me know the season flies by. Everybody says you have a long season, you play so many games. But it flies by.”