Spring hero or one of the boys of fall?

Spring hero or one of the boys of fall?

Every year there is always that one guy whose name comes up at the end of every practice session with the Clemson coaches. Guys like Paul Macko, Terrance Ashe and more recently Kurt Fleming.

There are others too, like Rendrick Taylor, who made big splashes but never lived up to all the hype created by what happened in the spring game or during spring practices.

What exactly am I talking about? Spring Practice heroes of course.

There are others as well that were called spring heroes that did become heroes in the fall as well. Former running backs Reggie Merriweather and Chad Jasmin come to mind, as well as a guy named Tony Elliott – Clemson’s current co-offensive coordinator and running backs coach.

The name that keeps popping up this year is C.J. Fuller. Clemson head coach Dabo Swinney has already brought up the running back’s name several times after practice this spring to the media, while Elliott had high praised for the former Easley star following Monday’s practice.

So is this coach-speak or is there really something to it?

“He has really impressed (us) these first couple of days of practice,” Elliott said. “He has natural vision and an ability to cut in the hole and the toughness that he runs with.”

This is not the first time Fuller’s name has come up. During camp last year, Fuller, despite his inexperience, was brought up several times by Swinney and former offensive coordinator now SMU head coach Chad Morris.

Though he didn’t know what he was doing, they would say, they could not help but notice Fuller’s raw ability, his vision and his explosiveness. 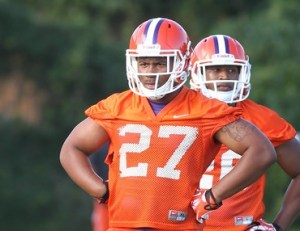 C.J. Fuller rushed for 3,381 yards and 27 touchdowns during his three-year career at Easley High School. (photos by Robert MacRae)

“We have known this for a long time,” Elliott said. “C.J. is a local product that I have had a chance to work with in (summer) camps and we saw from a young age that he is just a natural back with great explosion.”

Fuller’s explosion allowed him to rush for 3,381 yards and 27 touchdowns in his three-year career at Easley. He helped Easley High School to three straight state playoff appearances – a first in school history.

Fuller rushed for a school record 2,090 yards and 19 rushing touchdowns his junior season at Easley.

“We are seeing that same explosion and elusiveness with the size he has put on,” Elliott said. “He has gained a few pounds since he has come in and he has really transformed his body so are starting to see the total package coming together for him.”

But making his way up the depth chart might be difficult for Fuller (5-9, 215). The Tigers are loaded at the running back position which starts with Wayne Gallman and Tyshon Dye, who ended the season at one and two on the depth chart in 2014.

Zac Brooks is back in the fold as he returns from a broken foot suffered at the end of camp last August. Then there is C.J. Davidson and Adam Choice, who is expected to be back from a torn ACL injury in the fall.

In other words, there are possibly five guys ahead of Fuller on the depth chart heading into next summer. But the redshirt freshman is still getting his opportunity to compete and it seems as if he is taking advantage of it.

“He is in meetings every day, so he is learning the system,” Elliott said. “Once you get him pointed in the right direction, he lets his ability take over.”