Before he even played in his first college game at Clemson, ESPN was calling Deshaun Watson the next superstar in college football over the next three years.

But even the four-letter-network did not foresee the quarterback’s rise to fame happening so fast. In his first game, on his second pass, he threw a 30-yard touchdown pass to wide receiver Charone Peake on a pass that was on a rope, just over the head of a Georgia linebacker and between the safety.

It was a throw that is only seen made on Sundays, not Saturdays.

“He has been an elite athlete since he could probably throw a football,” said Clemson left guard Eric Mac Lain. “He broke any kind of record that existed in Georgia. He comes to Clemson and it is the same thing.”

That’s exactly what Watson did in his first start. The Gainesville, Ga., native threw as school-record six touchdown passes in Clemson’s 50-35 victory over North Carolina last September, including 435 yards – 20 yards shy of the school’s all-time record for passing yards in a game.

Watson followed that up with another record setting afternoon against NC State in which he totaled four more touchdowns and threw for 267 yards. In that game, he ran a zone read option play to the right and then hurdled a would-be-tackler to get in the end zone.

“He is wise beyond his years. He is not overwhelmed with the moment. He is special in that regard,” Clemson head coach Dabo Swinney said. 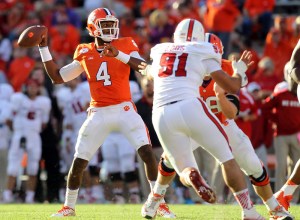 Clemson quarterback Deshaun Watson threw for 267 yards and totaled four touchdowns in the Tigers’ 41-0 victory over NC State on October 4, 2014. He even hurdled a Wolfpack defender (above) for one of his two rushing touchdowns.

Even injury could not faze the true freshman in 2014. After missing three games because he broke his finger and then missing another after what turned out to be a torn ACL in his left knee, Watson still went out in the regular-season finale against South Carolina an orchestrated a 35-17 victory, while throwing for 269 yards and two touchdowns. He also had two one-yard rushing touchdowns.

But the biggest moment from Watson came in the second quarter on the Tigers’ third scoring drive. Late in the quarter, he escaped from the pocket, juked a Gamecock defender and scampered nine yards for a first-and-goal at the USC one. He did it all with a knee brace that was acting as his ACL.

He scored on the next play to cap a 61-yard drive that gave the Tigers a 21-7 lead at the time.

“He is just a level headed guy. He is down to earth. He will never be fazed by the thing,” Mac Lain said.

Watson’s ability to be humble and stay level headed is what makes him so special, but at the same time is why he has so much hype surrounding him. ESPN, CBS, Fox and just about anyone and everyone that covers college football has the Tigers’ quarterback as one of the top candidates to win the Heisman Trophy in 2015, though he played in just eight games last year.

“That is something I will let the media and the fans take care of,” Watson said. “I don’t pay too much attention to it. It is a new year and I will have to prove myself this year. The past and history is not going to take care of this year’s wins.

“I just have to take it and get better.”

Last year, Watson threw for 1,466 yards, while completing 67 percent of his passes for 14 touchdowns and just two interceptions. His pass efficiency rating of 188.6 would have led the nation last year if he threw enough passes to qualify.

Off the field he recorded a 4.0 in the classroom, earning All-ACC Academic Team honors.

“He understands what is right, what’s not right and what he represents,” Swinney said. “He understands the platform that he has, but more importantly, he is just a great kid. He is a good person with good character and good integrity. He has a great mom who he wants to please.

“If they were all like him, we would not need coaches. We would just kind of get out of the way because all we could do is screw them up. He is not a guy that is overwhelmed with that stuff. He really isn’t. He has done a phenomenal job.”

In other words, the coaches don’t worry about all the hype that is surrounding Deshaun Watson because he doesn’t.

“If that time comes and I am one of those contenders, then I’m happy, but if not, I have to worry about my team first,” he said.