When Stephone Anthony came to Clemson in 2011, Dabo Swinney could tell right away the Polkton, N.C. product was going to be the leader of his defense one day.

“He came in here focused and has kind of been that quarterback, that captain kind of guy since the day he got here,” Swinney said.

That’s what got Anthony on the field as a true freshman and eventually to a starting role by season’s end, which carried over to 2012. But there was a glitch momentarily in his sophomore season where Swinney said, “he got a little fat and happy and lost his focus a little.”

That got Anthony benched for most of the second half of that season, but more importantly it got him motivated.

“All it took was sitting him on the sideline for a little bit and he got refocused,” Swinney said.

It motivated Anthony to become one the best middle linebackers Clemson has had in recent history. Anthony went on to record 131 tackles in his junior season and followed that up with 90 tackles this past year on his way to First-Team All-ACC honors.

He led the Tigers, who had the nation’s best defense in 2014, in tackles in each of the last two seasons.

“He is as good of person, player and committed guy that I have ever been around,” Swinney said. “I’m just really excited about his opportunity. He weighed his options last year and really could have come out but he felt like he was a legitimate first rounder and I think he has proven that. I think he has earned it. This is not a game of potential.”

Anthony’s film the last two seasons has shown that, but still there were questions whether or not he could play the middle linebacker position in the NFL. Some scouts underestimate his speed and doubt he can drop back in coverage in such schemes as the Tampa 2.

But Anthony ran a 4.56 in the 40-yard dash during the NFL Scouting Combine last month and then showed quickness and acceleration during his position drills there and during Clemson’s Pro Day.

That’s the question, where will Anthony end up? A lot of people think he might find his way into the bottom of the first round of the draft, while most project him to at least be a second-round selection.

“People look at the tape and know he is a great player, and you like him going into the combine, but then you see him work – you love him because he kind of validates some of the things you see on tape but maybe you weren’t sure about it until you can actually put the measurements on paper,” Swinney said. “I was surprised there was this perception that he could not play in the Tampa 2 coverage because this guy can run.

“But you have to go prove it and he did that.” 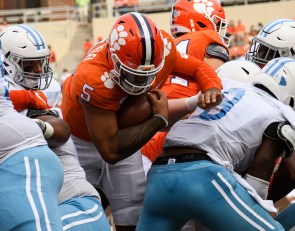 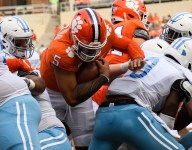