There was no reason for Sammy Watkins to return to Clemson in 2014 – he was a bona fide first-round draft pick and the year before the same could have been said for DeAndre Hopkins. It made sense for them to turn pro.

Watkins ended up being selected No. 4 overall by the Buffalo Bills last May, while Hopkins was the 27th overall pick of the 2013 NFL Draft by the Houston Texans.

But guys like Watkins and Hopkins are rare. Not every junior who enters the NFL Draft will become a first-round pick. It just isn’t possible.

Would defensive end Vic Beasley had been selected in the 2014 NFL Draft had he decided to enter the draft after his junior at Clemson? Sure, but there was no guarantee, especially when it came to the first round. Linebacker Stephone Anthony could have done the same and so could have defensive tackle Grady Jarrett.

“Unless you are a first rounder, it just does not make any sense,” Swinney said. “It really doesn’t unless there is some kind of mitigating circumstance or something.”

But Beasley, Anthony and Jarrett all decided that returning to Clemson was the best option for them and now they are seeing the benefits of coming back and finishing out their careers. Beasley proved his All-American season as a junior was not a fluke as he was even better as a senior, again earning All-American honors as well as being named the ACC Defensive Player of the Year.

Anthony and Jarrett both earned All-ACC First Team accolades as the three of them played huge roles on why the Tigers led the nation in total defense and in 10 other defensive categories.

“You have an opportunity to finish. That’s a big deal,” Swinney said. “That is more of a big deal then people know. You talk about guys finishing, graduating – that is something people keep up with.

“I think that says a lot about a guy on what his priorities and commitments and his ability to stay focused and achieve his goals. It is not an easy thing to balance at this level.”

But Beasley, Anthony and Jarrett did just that and in the process graduated from college, became better football players and increased their NFL Draft stock. Beasley is being talked about as a top 10 pick, while Anthony is being mentioned as a possible late first-round guy or an early second rounder. 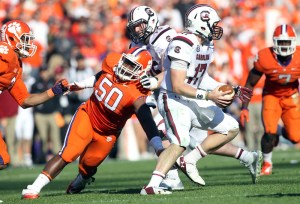 As for Jarrett, he could hear his named called by the third round.

“My mom always pushed education in my household. Education was first and foremost in my house,” Beasley said. “I just wanted to get my education and do right by my mom and inspire other people that football isn’t always going to be there, but that education is always there.”

Anthony, who was projected as a third-round pick after his junior season, recorded 130 tackles as a junior to lead the Tigers, and then came back to record a team-high 90 tackles this past season. Though some doubted Anthony’s speed on film, they have now seen through his 40-time at the combine that he is faster than they thought and does have the speed to drop in coverage.

Jarrett decided before the Orange Bowl following the 2013 regular season that he was coming back for his senior year and it was a wise decision. His performance in the Orange Bowl got him noticed and then he followed that up with an All-ACC season that included 73 tackles and 10 tackles for loss from his defensive tackle position.

In the Russell Athletic Bowl against Oklahoma, he dominated one of the nation’s best offensive lines with four tackles, including 3.5 tackles for loss and a caused fumble.

Jarrett followed that up with a good showing at the Senior Bowl, a good performance at the NFL Scouting Combine and at Clemson’s Pro Day, in which he did every drill, again.

“This is a once and a lifetime opportunity and I just wanted to make the most of it,” Jarrett said.