So what have we really learned about the 2015 Clemson Tigers this spring? Well, Clemson head coach Dabo Swinney really likes this team and he thinks it is going to be “a really, really good one.”

But what else do we know about this new group of Tigers? Are they tough? Are they physical? Can they be as good or better than last year’s team?

The good news is you can make your own judgments on Saturday when Clemson concludes spring practices with its Annual Orange & White Spring Game in Death Valley. The game is scheduled to kick off at 2:30 p.m.

But, just to give you an idea of what to look for, or at least what I will be looking for, here are five questions I have when I sit down and observer the game.

We have been hearing all spring how well Schuessler has played and how he has taken advantage of his opportunity when it came to taking first team snaps. His numbers in the two scrimmages have been okay, but nothing to really write home about. Swinney said he did a good job of correcting his game management mistakes from the first scrimmage and that he really seems to be a leader in the locker room and in the quarterbacks’ meeting room. But with all that said, the last memory I have of watching Schuessler was seeing him in bowl practice take few snaps with the first- and second-team offenses. Remember, he played no meaningful snaps against Georgia State last year when he and Cole Stoudt were the only two quarterbacks on the team. Has he gotten that much better? Maybe he has or maybe he hasn’t, but we will find out something on Saturday. Or at least I hope so.

Are the freshmen offensive linemen really that good?

We have heard a lot this spring about Mitch Hyatt, Jake Fruhmorgen, Justin Falcinelli and Taylor Hearn on the offensive line.  That’s no surprise. They were brought in to raise the level of talent, and play, on the offensive line and it seems that is the case. This will be the first time we actually get to see if what the coaches have been telling us is true or is just coach speak. I hope it is true. After watching last year’s offensive line just barely survive though the season, it will be nice to see them have a little bit of quality depth for a change. Keep in mind, Swinney has the team divided in two groups so they will not all be on the same squad in the spring game, but watching them individually should tell us a lot about what they have accomplished or not accomplished. 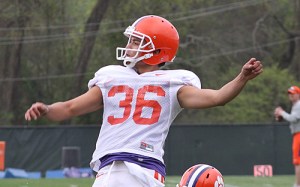 How bad is the kicking game?

Clemson is looking for a new long snapper, a new holder and a new punter this spring and from what we heard, they have a lot to get fixed. Swinney says kicker Ammon Lakip is playing okay. I don’t know what that means, but it did not sound like a glowing endorsement for the senior when he said it on Wednesday. That bad news is there doesn’t seem to be anyone of the staff to push him for the starting job by the way. The backups kickers, however, are struggling. They have had four field goals blocked this spring and have missed several others. The only thing they have been this spring is inconsistent at best.  Swinney says the kicking game will be live on Saturday so I’ll also be watching to see how guys like Germone Hopper and Artavis Scott look on punt returns, while watching Wayne Gallman on kick returns. Last year, Clemson had one of the worst kickoff and punt return teams in the country.

Is Kevin Dodd the answer at defensive end?

We all know what we are getting in Shaq Lawson—who by the way has had a great spring—but what does Dodd have to offer? He has played very little in his three seasons at Clemson. He believes he can be a force in Clemson’s rushing defense, but he also likes the way he has improved in his speed rushing off the edge. From all accounts he has made big strides this spring which has been good for his position coach Marion Hobby, who has been able to give more attention to his younger defensive ends this spring.

Are Clemson’s linebackers as talented as we have been told?

Ben Boulware is moving over to the weakside. B.J. Goodson is playing the middle linebacker spot. They both, as expected, have had good springs. Other than that we really know very little about the rest of the linebackers. Is Dorian O’Daniel ready to take the next step and be a starter at the strongside position? What about Korie Rogers? How good can he be and will he make an impact on the defense this season? How about T.J. Burrell, is he ready to take the next step and become a regular on defense. Then there is Kendall Joseph, the coaches have been bragging about his athletic ability and the plays he has made this spring.

Things did not end too well for Clemson or the ACC in 2020. Granted, for the first time the Atlantic Coast Conference got two teams in the College Football Playoff in the same year, joining the SEC as the only (…)