Is Leggett a victim of his own success?

Is Leggett a victim of his own success?

John Hinson chuckles when he hears Clemson fans say his former head coach, Jack Leggett, has lost a step or doesn’t know how to coach anymore.

“It’s tough for me to hear negative things about him because I know the type of coach that he is. I know the type of person he is off the field,” the former Tiger said. “As a fan you are never going to experience that. For the fans that do not support him, they don’t know the whole story, but that is kind of the nature of the beast.”

So what is Leggett’s story, exactly? Hinson believes Leggett is a victim of his own success. And that beast is a career that put Jack Leggett in the College Baseball Hall of Fame.

In 35 years as a head coach, Leggett has won 1,323 games – fifth among active coaches and ninth all-time—including 946 in his 22 years at Clemson.  He has guided the Clemson program to 20 NCAA appearances in 21 years, including six trips to the College World Series and five more Super Regional appearances.

“He set the bar so high people almost take what he has done for granted, in my opinion,” Hinson said. “When you set the bar by going to the World Series every four years, and you have done that throughout your entire career, people automatically think he has forgotten how to coach.

“They expect him to reach where he has reached so many times that when he doesn’t they don’t realize how great of an accomplishment those other times were and how hard it is to get Omaha as many times as he has gotten us there.”

Hinson was on Leggett’s last College World Series team in 2010. He was also on Leggett’s only Clemson team not to earn an NCAA Tournament bid. The 2008 Tigers—Hinson’s freshman year—went 31-27-1, but two years later Leggett had the program back at the top of the mountain competing for a national championship, again.

At the time, like this year with the Tigers struggling to a 23-21 record, many fans thought Leggett had lost his ability to coach and inspire players, but he proved that was not the case.

“Coach Leggett is a Hall of Fame coach. He is a great coach and a great guy,” Hinson said. “I was glad I got to coach there in 2013 because I got to see the other side of him, which was awesome to say the least. You can tell, when you are playing for him he is gung ho and has so much energy during practice and during workouts, it is almost never ending.

“He expects the best out of you every day and he holds you to a really high standard and sometimes you think the standard is too high, but looking back on it, it was exactly what I needed for sure. Whenever you go back and you see him off the field or in the locker room as a coach, he cares about every single one of the players. That’s what impresses me the most.” 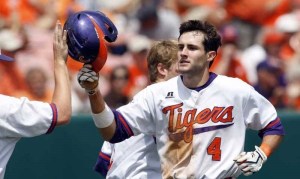 John Hinson played for Clemson from 2008-’11 and was a volunteer assistant coach for one year in 2013. Hinson was a member of the 2010 Clemson team that advanced to the College World Series.

Hinson understands the fans want to win and do not like having years like they are currently having. He understands why they’re disappointed with the fact Clemson has not hosted a regional since 2011 and has not made it past the regional round of the NCAAs since the 2010 College World Series team. But what they don’t understand is that no one is more upset about that than Leggett himself.

“For the fans, it is probably you need a good recruiting class and one plus one plus one equals three and when you put them in place that means you go to Omaha, but there are a thousand moving parts to get there,” Hinson said. “I wouldn’t say it is the luck of the draw because it does take recruiting, it does take preparation and hard work, but at the end of the day the team has to be hot at the right time to get there.”

Hinson, who understands Leggett has just one year remaining on his contract, hopes the fans are knowledgeable about the current situation at Clemson and how Leggett and his staff have not been playing on the same playing field as other schools when it comes to recruiting, facilities, finances and other administrative factors.

In other words, Hinson feels the fans are making judgments based only on the exterior factors and are not taking everything into account.

“If the average fan down there does not understand how this all works – there is essentially a true 11.7 scholarships and then there is what you might call an inflated 11.7. This is where other schools are able to find other means to get players in school,” said Hinson, who had a 40-percent scholarship and had to take out student-loans and find others means to pay the rest of his tuition to attend Clemson. “Other schools are able to use in-state tuition, the common market or other financial ways to help (like endowment funds). They give them a scholarship and then they have other means to help outside that 11.7. That is a game changer.

“If you don’t thing it is, you are wrong. If you have someone that is torn between a Clemson and a Vanderbilt and you are telling them ‘You are our guy. We want you. Come here because our goal is to get to Omaha.’ You are telling them all of the great things they can experience here at Clemson and the history, but at the end of the day you have to say, ‘We will give you a 35-percent scholarship or 40 percent.’ Then a player talks to Vanderbilt and they are saying ‘We have a 65 or 70 percent scholarship for you.’ What are you going to do? That’s just one thing Coach Leggett is up against.”

Another is facilities, which Hinson is glad to see Clemson is doing something about. Currently, along the first base side, a new players’ lounge, clubhouse area, coaches’ offices and museum is being constructed and his expected to be completed sometime this year. The sad part is, it is way overdue and it has hurt the Tigers on the recruiting trail the last five or six years.

Coming into this season, Clemson’s player accommodations ranked in the bottom half of the ACC, below non-traditional baseball schools like Virginia, NC State, UNC and Notre Dame. Hinson says Leggett deserves the opportunity to coach and recruit off the new players’ facility.

“The new facility will help Coach Leggett in the future because, let’s be honest, Clemson was far behind from where it should be with its competition,” he said. “On the level that Clemson competes at, its facilities, and I am not talking about the playing surface, the playing surface is great, but the players’ facilities are light years behind and that will help in the future.

“I hope they give him that opportunity. I will be very disappointed if they don’t and I know a lot of other former players will too.”