It could be record draft for Clemson

It could be record draft for Clemson

Last season, no defense in college football was more dominant than Clemson’s No. 1 ranked defense. The Tigers led the nation in total yards allowed, pass efficiency defense, fewest yards allowed per play, tackles for loss and seven other defensive categories.

They topped off the year with a dominating performance in the Russell Athletic Bowl, holding Oklahoma’s powerful offense 32 points below its season average in a 40-6 victory.

Now, starting tonight in the first round of the 2015 NFL Draft, as many as seven players from that unit might be selected.

“I’m sure that would have to be a record somewhere at Clemson,” former defensive tackle Grady Jarrett said.

It will not be a record officially because the 1983 NFL Draft had nine Tigers selected overall, but that is when the draft used to be 12 rounds long. As for players drafted through the first seven rounds, which is the current process the NFL moved to in 1992, the 1991, 1999, and the 2011 draft classes had six Tigers chosen.

This year’s class is headlined by two-time All-American defensive end Vic Beasley, who is expected to be a top 10 pick and no worse than a top 15 selection. Linebacker Stephone could also be chosen in the first round, but many believe he will be a second-round pick, while Jarrett is expected to be off the board by the third round. 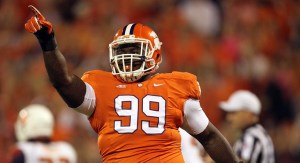 Former Clemson defensive tackle DeShawn Williams could be selected in the late rounds of this weekend’s 2015 NFL Draft. Clemson could have as many a seven players from its top-ranked defense chosen in the draft.

Defensive ends Corey Crawford and Tavaris Barnes could hear their names called from the fourth thru through the seventh rounds, while cornerback Garry Peters and defensive tackle DeShawn Williams could go in the late rounds as well.

“But the guys going into this draft, that competed in pro day and did really well, we have depth in this draft and there are a lot of chances for guys to go make teams. I think we are going to be a really special class and will go down in Clemson history as a measuring stick for other players to reach.”

Beasley will be the first Tiger off the board. Some of the so-called experts have him being picked as early as No. 3 to Jacksonville and as late as No. 13 to New Orleans.

“It is kind of been overwhelming. I’m ready for the draft to come,” said Beasley, who will be in Chicago tonight as part of the NFL Draft Experience beginning at 8 p.m. “I’m looking forward to the draft. It is an exciting time in my life and I’m very excited about it.”

Some think Anthony could be chosen by the Green Bay Packers late in the first round at No. 30, but most see him coming off the board in the second round.

As for Jarrett, he was told to be waiting by the phone as he watched the first round, but the experts seem to think he will have to wait until the third round to be selected. If his picked in the first round, and Beasley and Anthony are also selected, it could mark the first time in history three former Tigers were chosen in the first round of the draft. The 1979 and 1982 draft classes had two first-round selections.

In 1979, wide receiver Jerry Butler went No. 5 overall to Buffalo, while quarterback Steve Fuller was selected by Kansas City at No. 23 overall. In 1982, defensive tackle Jeff Bryant went No. 6 overall to Seattle, while wide receiver Perry Tuttle was taken at No. 19 by Buffalo.

Overall, Clemson has had 24 players selected in the first round of the NFL Draft and eight of them have come in the first 10 picks.

The 2015 NFL Draft will run tonight with the first round only, the second and third rounds will be on Friday beginning at 7 p.m., while the fourth-seventh rounds will run all afternoon on Saturday.

“It will be interesting to see, once the draft is all over, how we compare to other schools in the nation,” Jarrett said.