News and notes on Malik Herring, Trevor Lawrence, K.J. Henry, Derrik Allen and Ricky Slade Jr., all of whom were in Clemson on Saturday for Junior Day.

Word of Herring’s appearance stayed under the radar until he tweeted pictures of him decked out in the Tigers’ away colors.

The four pictures included a shot with defensive ends coach Marion Hobby, who’s trying to lure him to Clemson to play defensive end.

When the 2017 four-star from Forsyth, Ga. visited in the fall for the Boston College game, Hobby said to him: ‘Hey, did I ever tell you that I really want to coach you?’

Hobby had the same message on Saturday.

The answer is yes, all the time.

While he’s not in a rush to make a decision and doesn’t plan to narrow his list until closer to football season, Clemson is firmly in the mix, thanks to Hobby’s work.

Two others make up Herring’s lead group: Georgia and Alabama. Tennessee, Florida and Ole Miss are also in line to receive visits.

Sticking with the theme of position coaches recruiting Georgia’s top talent — Lawrence had some good things to say about Streeter, who’s already got an impressive list of quarterback prospects lined up to be the queue.

Adding Lawrence would make a strong group of quarterbacks that much better, and Streeter’s made a good impression. 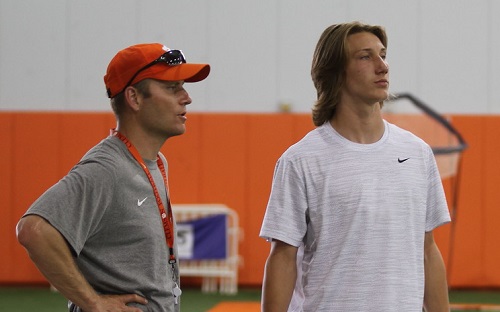 “He’s just a cool guy and I like his personality,” Lawrence said.

“It’s a lot like the offense we run right now,” Lawrence said of Clemson, “And coach Streeter really thinks I’ll excel in that offense.”

Georgia hosted Lawrence two weeks ago. He hasn’t been to Tennessee in 2016, but he hopes to make a return trip there in the near future. Lawrence said Clemson was “awesome” on Saturday.

“Just getting to build relation ships with the coaches,” he said, when asked about the trip’s highlights.

Clemson hosted Lawrence last summer for an afternoon during the Dabo Swinney Football Camp. He returned for the Notre Dame game.

The five-star mentioned “the atmosphere and coaches” as things he likes while on campus at Clemson.

The offer to K.J. Henry

“My dad wanted me to wait until we went to the Junior Day, to see everything, before I let it out,” Henry said.

The offer is as an athlete — Clemson will let him choose if he wants to be recruited as a tight end or defensive end. Last sum

mer, at camp, they worked him out at both positions.

Henry’s yet to decide on a position. He’ll play more tight end this fall than he did as a sophomore, so he’ll wait and see how that goes before making a call. 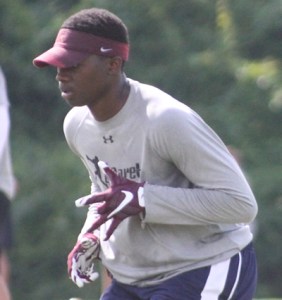 Allen during camp at Clemson

Another 2018 target from Georgia.

Clemson offered four-star cornerback Derrik Allen (Marietta-Lassiter) in June, after a strong showing at camp. He was among the contingent of sophomores who were on campus Saturday.

“Great visit. Got to talk 1-on-1 with coach Swinney, (Brent) Venables and (Mike) Reed. Clemson is definitely a top school of mine,” Allen said.

Ranked by 247 as the No. 2 cornerback in the 2018 class, Allen also lists offers from Alabama, Auburn, Georgia, South Carolina and Tennessee.

Top among the Virginia guests

Several prospects from Virginia made the trip down to Clemson, including Ricky Slade Jr., who’s ranked by 247 as second-best all-purpose back in the class of 2018.

Slade was accompanied by John Harris, an assistant coach at C.D. Hylton High School in Woodbridge. Harris told TheClemsonInsider that he thought the visit went well.

“I think he really enjoyed practice and it hit off with the staff,” Harris said.

TCI will have more from Junior Day in tonight’s edition of the Insider Report, in addition to the full interviews from several of the visitors.