Championships are not about making money

Championships are not about making money

Playing for a national championship in college football is an expensive ticket.

This past year, according to financial numbers The Clemson Insider obtained through the Clemson Athletic Department, Clemson paid in excess of $3 million to play Alabama in the College Football Playoff Championship Game.

Clemson lost close to $1.04 million in total expenses for its postseason trips to Charlotte (ACC Championship Game), Miami (Orange Bowl) and Glendale, Ariz. (CFP Championship Game). On top of that, the school owed another $2 million in incentives to head coach Dabo Swinney and his assistant coaches.

“Some of the perception might be, or might have been, we are now flowing in money — we have all these dollars because of the national championship.” said Clemson’s Deputy Athletic Director Graham Neff, who handles the athletic department’s business operations. “There is a cost to it, but that cost — we would gladly pay it and we are going to make it work. There are other revenues and it kind of rises the tide of the football program, the university and the athletic department.”

What exactly are those other revenues? There has to be some kind of benefit from playing in the national championship game, right?

In terms of exposure, the football program brought plenty to the university during its run to the title game. Clemson’s brand, through licensing royalties, is budgeted around $2 million. If that increases by 20 percent, because of the Tigers’ run to Glendale, then the magnitude would be in the $300,000 to $400,000 range.

Neff says Clemson is currently tracking ahead of that number, and is headed towards a record breaking year when it comes to licensing fees.

“That is not a huge magnitude piece for us. It is real dollars and it certainly helps, but it is not going to necessarily make or break us. But it is a big piece,” he said. “When you talk about the branding, you talk about our apparel deals and those types of things, so we certainly are expecting to have a record setting year there.”

IPTAY is also expecting to have a record breaking year. Its annual fund could reach more than $26 million this year, which would break last year’s record total of $25 million.

“We are tracking ahead of kind of where we were to date last year. It is just tough to tell until it gets to the end of the year because people are paying for their seat equity for football tickets and stuff like that, but we do anticipate a significant increase in our annual fund for this year as we are going through it,” Neff said. “A lot of that is driven from football and football parking and things like that.”

A view of midfield before the 2016 CFP National Championship between the Clemson Tigers and the Alabama Crimson Tide at University of Phoenix Stadium. (Photo Credit: Kirby Lee-USA TODAY Sports)

To help the financial burden, IPTAY introduced a new $60 /“Paw Level” tier, which is aimed at out-of-state donors.

“We actually had a donor that donated from Hawaii at the $60 level. He wanted to be a part of it and give his support,” Neff said. “He is not getting any benefits or parking benefits. We do all kinds of little things like that, so we expect the annual fund to certainly increase this year.”

Clemson expects an uptick in ticket sales, too. However, that money won’t show up until after next year’s budget. Clemson Football had a record year in ticket sales in 2015, selling out all seven home games.

“It was a phenomenal year,” Neff said.

In the end, it still came at a cost, but it was worth it.

“We would do it again next year … one hundred percent,” Neff said. “Obviously, you live and learn. For one, the locations would be different. If we are fortunate to get back there, and it’s Atlanta and then Tampa then that is not going to be as expensive as Miami and Phoenix. It’s just not. That’s one thing. That’s a reality.”

The College Football Playoff gives participating teams $2.08 million in travel stipends to both the semifinals and championship game. Of the $4.16 million Clemson received to play in Miami and in Arizona, it spent an additional $1.3 million. The trip to Arizona was $3.3 million, which includes $1.45 million for travel and lodging the entire traveling party from Clemson.

“We are all working with the conference and the college football playoff committee on looking at how they provide stipends,” Neff said. “Right now they are just flat stipends so if Arizona State played in the national championship game this past year, then they would have received $2.08 million which is the same that Clemson got. I don’t know if that makes a whole lot of sense. 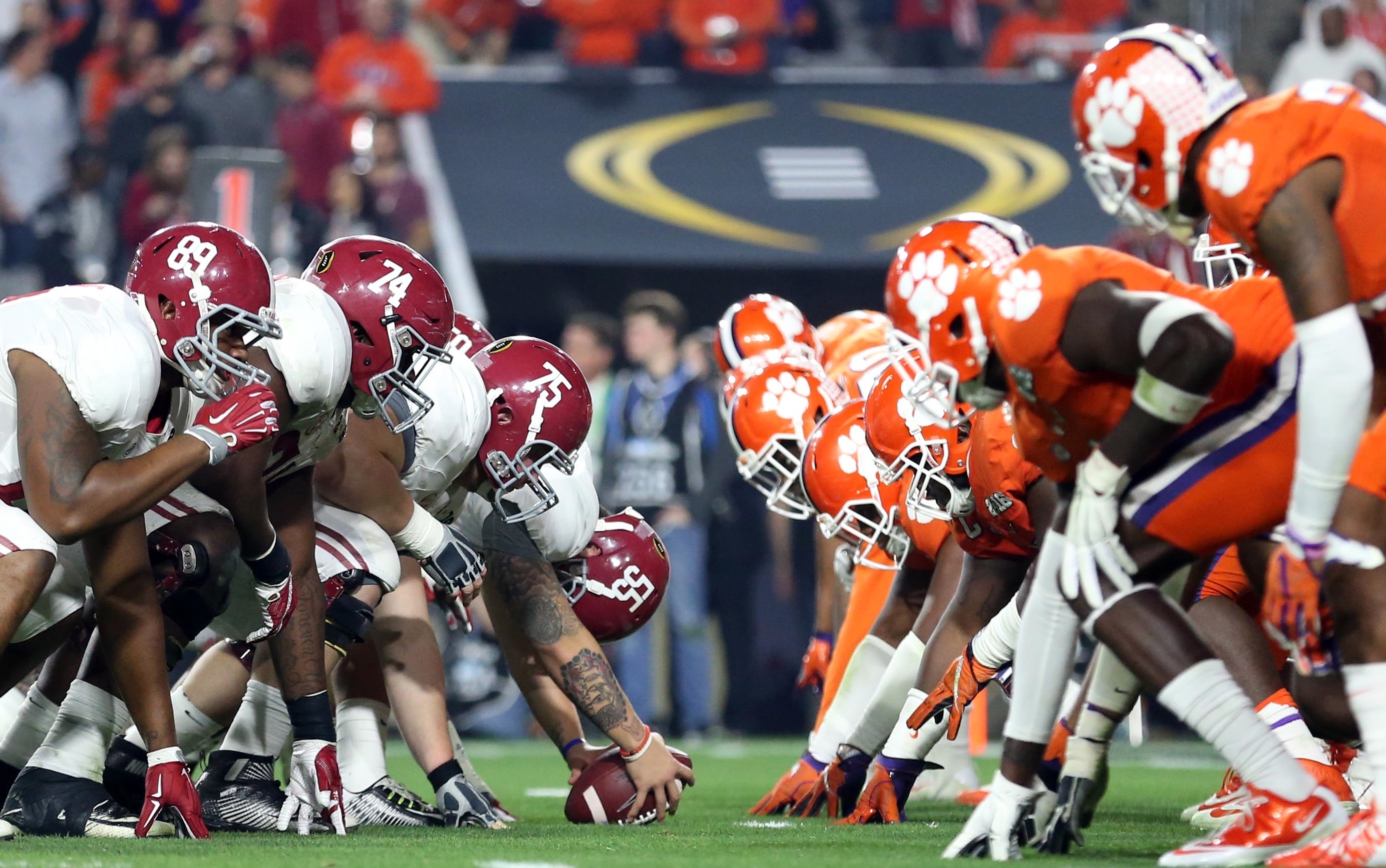 Alabama Crimson Tide and Clemson Tigers players line up before a snap in the third quarter in the 2016 CFP National Championship at University of Phoenix Stadium. (Photo Credit: Mark J. Rebilas-USA TODAY Sports)

With quarterback Deshaun Watson back to run the offense, plus the return of record-breaking running back Wayne Gallman, wide receivers Artavis Scott and Mike Williams as well as tight end Jordan Leggett, Clemson is expected to be one of the favorites to make it back to the College Football Playoff in 2016.

If that happens, Clemson will do its best not to be $3 million in the red.

“There are ways we can mitigate the risk. There are insurance options that we can look at. So perhaps we look to insure against a national championship bonus where that bonus is a big number. We can take out insurance in July and pay pennies on the dollar. If we win it, it is kind of already paid for,” Neff said. “There are some interesting things we are considering. We are kind of exploring it. There are some ways in which we can mitigate our risk or cut the top off of what we could potentially lose if we go to a national championship game.

“Those are just some things we are looking at, but at the end of the day, if none of those came to fruition then we would be willing and able to do it again.”

And truly that is what really matters — the opportunity to play for and winning a national championship.

“Making money … That would not be our expectation,” Neff said.