In a matter of months, Trapp went from relative obscurity on the recruiting trail to a target of a number of high-major programs. Trapp was without any scholarship offers in the spring of 2016, but by late September, he held offers from Georgia, Georgia Tech, Kansas State, La Salle, Rice and South Carolina among others.

Last weekend, Trapp collected a coveted offer from Clemson while on his official visit.

On Wednesday, the first day of the early signing period, Trapp signed with the Tigers.

The Clemson Insider was on hand for Trapp’s signing ceremony at his high school and caught up with Lower Richland head coach Caleb Gaither after.

“It’s been a little different,” Gaither said of Trapp’s recruitment. “It kind of started off — not to say slow — but the smaller schools, low-major, mid-major, and I think once he was kind of was found on the AAU circuit and his highlight film started hitting social media, it took off. The high-majors started calling him, whether it was ACC or SEC, and it was almost a domino effect after that.”

It didn’t take long for Gaither, who is entering his first season as Lower Richland’s coach, to recognize Trapp’s talent upon his arrival.

“He’s one of the best I’ve ever coached,” Gaither said, “and he can play at the highest level.”

Trapp chose Clemson over Charlotte, Rice and South Carolina. The ability to play multiple positions in head coach Brad Brownell’s system as well as the opportunity for early playing time were big factors in Trapp’s decision.

The 6-foot-5, 185-pounder can play the one, two and three positions, and Gaither described him as a do-it-all type player.

“They’re getting a five-tool guy,” Gaither said. “He does a little bit of everything as far as facilitating and rebounding, defending, his athleticism, his vision. He’s really good on the ball, passing the ball and stuff, so I think one through three as far as position, he can play it all. So, he’s just a great all-around player, and even more importantly he’s a great human being.”

“I think as far as his work ethic, it’s much of a Sindarius Thornwell,” Gaither said. “Same type of grind and passion for the game of basketball, and at the same time he’s also a great kid. Sindarius was a great kid — yes sir, no sir type of kid — and just real respectful, well mannered kid off the court as well. So, I see some similarities between those two guys.”

Gaither said Trapp is the type of person that others gravitate toward.

“He’s one of those kids his peers look up to,” Gaither said. “Everyone around the Lower Richland community kind of look up to him and admire him as a person. That’s why you see such a great crowd here today because he’s such a great kid, everyone is happy for him and they were eager to see where he was going to end up going.”

Having been around Trapp on a regular basis, both Gaither and Scott are confident Trapp will be a valuable addition to Clemson’s program.

And both Gaither and Scott believe he made a good choice in Clemson.

“Coaching him and being a former player from Clemson, it definitely makes me excited and proud for him to make that choice,” Scott said.

“I think it’s a great decision,” Gaither added. “He’s going to not just a great basketball school, but a great institution. I’m ecstatic for him, and I’m excited to see what he does once he gets there.” 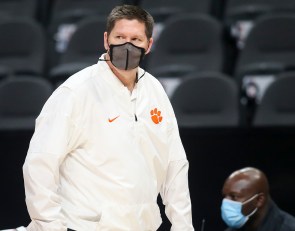 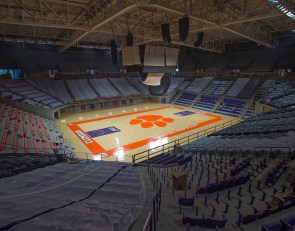