What a crazy week. Just when we thought it could not get any crazier… last night happened. Down went Louisville and Lamar Jackson. Now we are left wondering who will win the Heisman Trophy.

Can we give it to a quarterback with a losing record against ranked teams? If not who is next?

In a week where Clemson, Michigan and Washington lose… and then Louisville last night, where do we stand in the Heisman Trophy Race?

Donnel Pumphrey, SDSU, RB: Let’s start with Pumphrey. He has been dynamic all year. He has led his Aztecs to a 9-1 record all the while with a No. 24 ranking, only rushing for under 100 yards one time this year. That was Week 1. Last week he ran for 198 yards and a touchdown, averaging 7.6 yards a carry.

Lamar Jackson, Louisville, QB: Did Lamar lose it all with this blowout loss to Houston? I wouldn’t say so but he has definitely turned this into a race. Louisville was blown out by Houston, 36-10, and Jackson did not have a good game. He had as close to a terrible game as we’ve seen from him. He threw the ball for 211 yards and one touchdown, but only completed 20 of his 43 passes. Not only that, he ran the ball 25 times for only 35 yards… 35. Of course it did not help that he was sacked 11 times either. After this performance and Louisville dropping to 9-2, with a losing record against ranked teams, this is a race once again.

Jalen Hurts, Alabama, QB: Hurts leads one of two undefeated teams in the country. He leads the best team in the country. Last week he led Bama to a 51-3 win over Mississippi St. He played very well, too. Very well. He threw for 347 yards and four touchdowns, as well as rushing 11 times for 100 yards and a touchdown. Hurts has played well, but enough to bring the freshman the Heisman?

Deshaun Watson, Clemson, QB: Want to talk about frustrating? Coming off a loss to an unranked-team at home is tough, especially for his Heisman stock. The Pitt game was his for the taking. He threw the ball 70 times, while completing 52 of them for 580 yards and three touchdowns. Watson could have had one of the best games in Clemson history, but his carelessness with the ball led to three turnovers … Three very crucial turnovers.

Jabrill Peppers, Michigan, ATH: Coming off a loss against Iowa, Peppers did not have his best game totaling only five tackles and not so impressive play with the ball in his hands. He still has time to do something amazing, but it will be tough.

Dede Westbrook, Oklahoma, WR: Oklahoma is on a seven-game win streak. A ton of the credit should go to Dede. In the seven-game win streak, he has 1,100 receiving yards and 14 touchdowns. He has been an animal on the field. Last week against Baylor he caught the ball four times for 88 yard and two touchdowns. A slow start to the year has held him back.

Jake Browning, Washington, QB: Browning is coming off of a bad game. A loss to USC, throwing for 259 yards with 1 touchdown and 2 interceptions. He also ran for -36 yards. He did not perform when a star is supposed to. 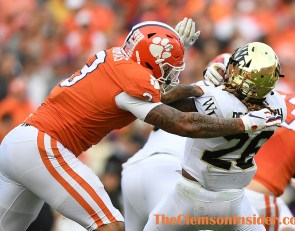