Countdown to tipoff: Nebraska at Clemson

Countdown to tipoff: Nebraska at Clemson

Clemson and Nebraska meet for the first time in history as part of the ACC/Big Ten Challenge. The game will tip off at 9 p.m. from Littlejohn Coliseum, and will be televised on ESPNU.

The Tigers are 9-7 all-time in the event and are in search of their first challenge win since 2011 at Iowa.

Wednesday’s matchup features two top-65 teams in the latest RPI according to WarrenNolan.com.

The Tigers are 15th nationally in free throw accuracy, according to the latest NCAA statistics. Clemson, coming off a 22-for-24 effort against High Point, is shooting 79 percent early in the season.

This is the first meeting

Sidy Djitte, averaging a double-double for the Tigers, is third among all players nationally in offensive rebounds per game (5.0). He has had seven offensive boards in each of Clemson’s last two games.

Jaron Blossomgame is coming off a season-high 27 points against High Point. He has averaged 18 points per game in two career ACC/Big Ten Challenge games, posting 24 at Minnesota last season.

Shelton Mitchell, projected to be the starting point guard, made his Clemson debut last time out, collecting two assists in 11 minutes against High Point. 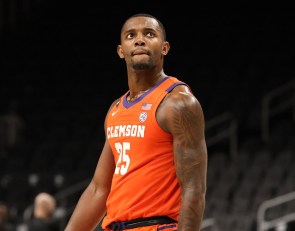