After Virginia Tech cut its deficit in half on a 1-yard touchdown run by Travon McMillian, Clemson responded with a touchdown of its own, its third in three possessions, on a 10-yard touchdown pass from Deshaun Watson to Jordan Leggett with 11:46 remaining in the first quarter. It was the second scoring connection between Watson and Leggett in the game, and it gave the Tigers a 21-7 lead.

The drive spanned 10 plays and 75 yards in 4:05. Fuller recorded 38 yards rushing on the drive, including a 27-yard carry on the second play of the possession that moved Clemson into Virginia Tech territory. Clemson converted three more third downs during the drive thanks to a pass interference call against Leggett, a 3-yard run by Watson and the touchdown pass to Leggett. 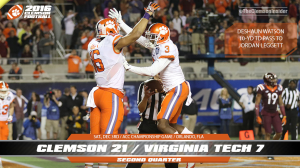