Deshaun Watson and Clemson’s offense came out clicking on all cylinders to open the contest, marching 75 yards on nine plays in 3:13 and taking a 7-0 lead on a 3-yard touchdown run by Watson.

A 15-yard reception by Artavis Scott off of a shovel pass set up Watson’s run on first and goal. Four of Clemson’s nine plays on the drive went for 10 yards or more. 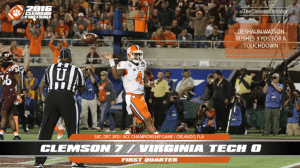