Hawkins on commitment: Clemson has been my dream school

Hawkins on commitment: Clemson has been my dream school

Yesterday, Bryar Hawkins gave a verbal pledge to the school he has wanted to play for since he was a kid.

“It’s been my dream baseball school ever since I was a little kid,” Hawkins told TCI. “And I feel like they have one of the best baseball programs in the country.”

Hawkins is a versatile player who has good power at the plate, and he feels hitting is his strength.

“I definitely feel I can contribute the most with my bat,” Hawkins said.

Head coach Monte Lee was thrilled when he learned of Hawkins’ commitment.

“Coach Lee was excited to hear it was my number one pick for some time and that I’m all in,” Hawkins said.

Hawkins is excited, too, to play for a well-versed coaching staff that cares about the wellbeing of the players.

“They’re not just knowledgeable and experienced about baseball,” Hawkins said, “but they’re genuine people who have true passion for the game and their players.”

Hawkins has an idea of how he will fit in at Clemson, and he looks forward to contributing in the future.

“I can contribute because I’m a hard worker,” Hawkins said. “Coach Lee referred to me as a two-way player. It will give me even more opportunity to contribute to the team.”

The 6-foot-2, 180-pounder was a 2016 Underclass Honorable Mention performer by Perfect Game. 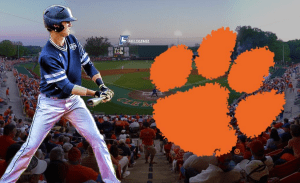 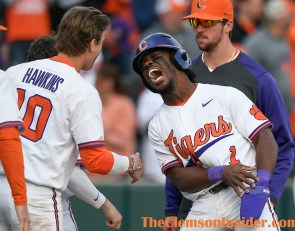