Clemson commitment Mike Jones leads the charge for IMG Academy (Bradenton, Fla.). The four-star linebacker is a vocal and emotional leader, and his teammates feed off of his energy.

Jones led his team onto the field for pregame warm-ups for its game against Carol City on Friday night and then again out of the tunnel before kickoff. During warm-ups, he could be heard shouting, “Y’all already know! Y’all know what time it is!”

Jones is passionate about the game of football, and being a leader comes natural for him.

“That’s just in my DNA I feel like,” Jones told The Clemson Insider during the first stop on our Tour of Champions at IMG Academy. “I’m chill going in, and as soon as we come out my blood starts rushing and I just start screaming. I just love the game. I love the energy, I love to get everybody hyped.”

After Jones began IMG’s eventual 41-22 victory with a bruising tackle on the first play from scrimmage, the game went into a weather delay.

As the teams jogged back to their respective locker rooms, they began trash talking and had to be separated by referees after getting in each other’s faces.

You can bet Jones was in the middle of the scrum.

“That’s football, man,” he said. “That’s the type of stuff I love. There were competitive guys all over the field.”

Jones made the highlight reel in the third quarter when he received a handoff on a fake punt and ran for a first down to keep one of IMG’s drives alive.

At linebacker, he was a steady presence throughout the game and helped anchor a defense that set the tone by allowing just one first down in the first half.

“Our offense and defense came out here and executed,” Jones said. “The energy was high, and it was a great time.”

Jones loved lining up behind five-star defensive ends Xavier Thomas and Nolan Smith, both of whom were playing in their first game for IMG after transferring to the school over the offseason.

Thomas, of course, committed to Clemson in April before the annual Orange & White spring game. Smith, who is currently committed to Georgia, is one of Clemson’s top targets in the class of 2019.

Jones is working to help the Tigers flip Smith, and he hopes Smith ends up playing alongside him and Thomas at the next level, as well.

“It makes my job super easy,” Jones said of playing with Thomas and Smith. “This week I was covering a lot rather than in the box, and there were incomplete passes everywhere, picks, because them boys were getting to the rock every play. That made my job a lot easier. They did a great job.”

After winning decisively in the season opener, IMG is preparing to travel to Chandler (Ariz.) High this Saturday for a game that will be televised by ESPNU.

“We’re in a great position right now,” Jones said. “Can’t wait to come out and compete, play on ESPN next week and just keep on getting better.”

He became the first member of Clemson’s 2018 class when he committed to the Tigers following the Dabo Swinney Camp in June 2016.

No. 24 Mike Jones and IMG Academy getting hyped up before their game against Carol City pic.twitter.com/S2OUWKaZ0a

Have you ordered the 2017 Clemson season preview ‘Best is the Standard’ from the staff that covers Clemson football 365 days a year? Order yours today to make sure you get a copy! 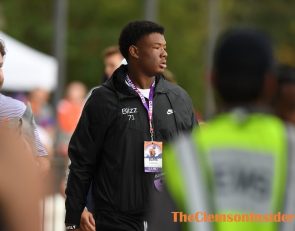 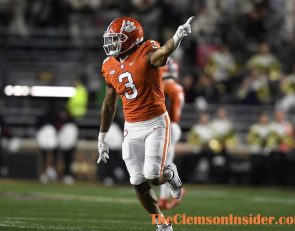 Swinney: Clemson doing the best thing for Thomas and his future 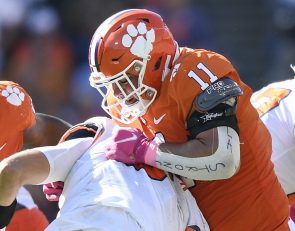