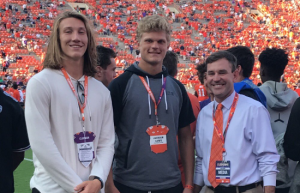 A tight end prospect in the class of 2019 is beginning to get interest from Clemson, and he just so happens to be teammates with five-star Clemson commit Trevor Lawrence.

Jackson Lowe of Cartersville (Ga.) High was invited to visit Clemson on Saturday for its game against Auburn and loved his experience in Tiger Town.

“It was by far the best visit I’ve been on,” Lowe told The Clemson Insider. “To be honest, I enjoyed everything on my visit to Clemson.”

Lowe has offers from Rutgers, Syracuse and Toledo, while Vanderbilt and Wake Forest are showing interest along with Clemson.

The 6-foot-4, 210-pounder began hearing from the Tigers after catching four passes for 81 yards and a pair of touchdowns from Lawrence in their team’s nationally televised game against Bartram Trail on Aug. 26.

Members of Clemson’s staff attended Cartersville’s win over Calhoun a week later, and Lowe had a chance to catch up with Clemson recruiting coordinator Brandon Streeter and tight ends coach Danny Pearman while on campus.

“They were glad I was up there and able to visit,” Lowe said.

The visit certainly met if not exceeded the expectations of Lowe, who has had conversations with Lawrence about Clemson in the past.

“He said it’s a great place to be and the fans are awesome,” Lowe said.

Lawrence and Lowe have developed a strong relationship, and the latter has thought about what it would be like to team up with the former at Clemson in the future.

“Trevor is my QB and friend,” Lowe said. “I love having the opportunity to share the field with him.

“Words can’t explain what it would mean to get an offer from Clemson, and to continue playing football in college with Trevor.”

Lowe is planning to visit Vanderbilt, as well, and hopes to return to Clemson for another game this season.

His brother, Trevor, is a freshman linebacker at Georgia.