Jeffrey Green has become one of the most decorated student-athletes on Clemson’s track and field team.

The Miami, FL native has been running track since he was seven years old, and his eyes are set on making it to the Olympics one day.

But due in part to battling mental obstacles, the journey to this point in his career was no walk in the park. His coach, Lenox Graham, has helped him get back to his prime.

“I got a new coach this year, and he helped me a lot with my confidence,” Green said. “I had a lot of confidence issues in the past. He really helped boost my confidence and talked me through a lot of things. One thing I’ve started to do more is praying, which I think helped me a lot this year as well. I think that was one piece that was missing. I started praying, reading scriptures, and talking to God. I think that’s helping me a lot as well.”

Green’s key to success has been triumphing over the mental aspects of competition, believing in himself and forgetting the rest.

“I think what’s helped me is knowing who I am and what I can do,” Green said. “Sometimes you tend to forget when you’re in a heat with other guys that look as good as you, as muscular as you, as tall as you, and physically fit as you. You sometimes forget who you are as an individual. You just have to know who you are, and be ok with who you are, be comfortable with who you are. Sometimes physique doesn’t have anything to do with it.”

Through the thick and thin, being a part of the Clemson track and field team has become more than just a sport to Green. It’s become family, belonging, and confidence.

“It’s meant a lot for me,” Green said. “My head coach, Mark Elliott, a great guy, anything I ever need, he’ll always provide it for me. I thank him for that. I want to thank my coach now (Lenox Graham), and my coach in the past, Althea Thomas, she was a great lady. I like my coach now. He’s been doing a wonderful job. He’s really patient with all of us.”

Now, embracing the final semester he has as a senior at Clemson, he can look back at his track career without regret.

“I’m 100% where I want to be. I’ve never been running this fast and being consistent and healthy. I’m definitely where I want to be, there’s nowhere else to go but up from here in my eyes because I’m having a great year, I’m in the best shape of my life right now.” 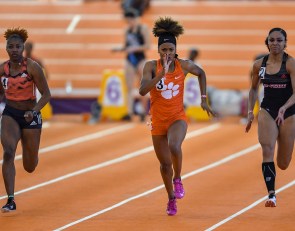 Clemson sprinter has found motivation within herself