Clemson in the hunt for 5-star Alabama OL

Clemson in the hunt for 5-star Alabama OL

For out-of-state programs, pulling top prospects from the state of Alabama — away from Alabama and Auburn — is a tall order.

Oxford (Ala.) five-star offensive lineman Clay Webb is one of the prospects being heavily pursued by the in-state schools. He is ranked as the No. 1 prospect in Alabama, the No. 1 center and a top-40 overall prospect in the 2019 class by all of the major recruiting services.

Rarely does Nick Saban let the state of Alabama’s top recruit slip his grasp. Only twice since 2005 has the No. 1 prospect in Alabama not signed with the Crimson Tide.

Clemson, though, is one of the two schools that has nabbed the Yellowhammer State’s top-ranked player during Saban’s tenure. On National Signing Day in February, the Tigers beat out Alabama and Auburn to ink five-star wide receiver Justyn Ross.

Could Clemson pull off the feat again in this recruiting cycle by landing Webb?

It won’t be easy, but the Tigers are in the hunt, and Webb said at The Opening Atlanta regional camp on Sunday that staying in state isn’t a sure thing for him.

“I can definitely leave the state anytime,” Webb said. “The only thing I’m trying to find in a team is the place where I feel like I’d fit in as a player and a person, where I’d get to know the coaches good and I’d get to know the players like brothers.”

Webb (6-4, 300) has visited Clemson a couple of times, most recently last June when he competed at the Dabo Swinney Camp.

His experiences on campus have left a good impression.

“It’s more of a brotherhood up there,” he said. “The players are really nice to each other. They fellowship a lot. The coaches are really, really nice. It’s just like a different atmosphere.” 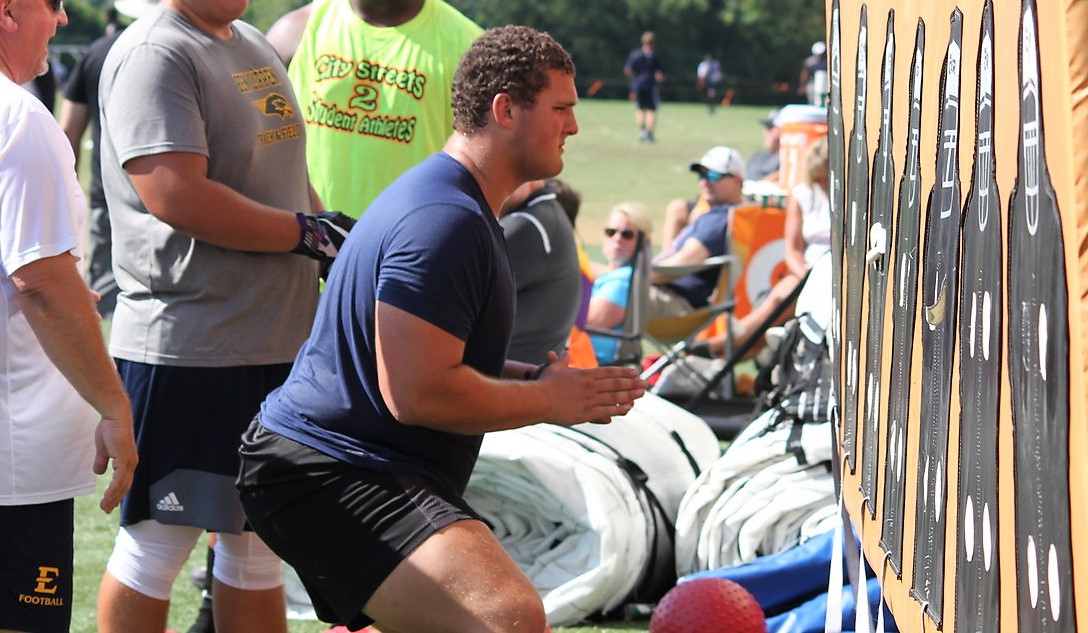 Clay Webb at the Dabo Swinney Camp in June 2017

While Webb hasn’t formally announced his top group of schools, he said Clemson is high on his list. Alabama, Auburn and Georgia are viewed as the other strongest contenders for his services.

Bates communicates with Webb regularly as his primary recruiter for the Tigers. Bates sends Webb hand-written letters and shares poetry that he has written.

The letters are less focused on football than they are life in general, according to Webb.

“I feel like Todd Bates cares more about the life after (football) more than the life during football,” he said.

Webb is fond of Caldwell, too, after getting to know him during his visits to Clemson.

“I love him. He’s so much fun,” Webb said. “We haven’t gotten to talk a whole bunch, but every time I’ve been up there, he’s pretty funny.”

Webb is taking things slow with his recruiting process right now. He doesn’t expect to make his decision until the final game of his senior season or in December.

The Tigers are looking to get Webb back on campus for another visit and continue building their relationship in the process.

“If we can find a right time, then we’ll head up there,” Webb said of potentially returning to Clemson.

Webb is ranked as high as the No. 12 overall prospect in the 2019 class by Rivals. He intends to sign in December and enroll early at his school of choice in January.